A motorist has been filmed allegedly watching a wrestling match on his phone while driving – as a police car passed him in the next lane.

Rod Main, 59, captured the shocking footage on Tuesday when the car in front stopped at a roundabout shortly after coming off the M8, the busiest motorway in Scotland.

Mr Main noticed the screen on the Ford Fiesta’s dashboard after the car had come off the slip road heading towards Govan, Glasgow. 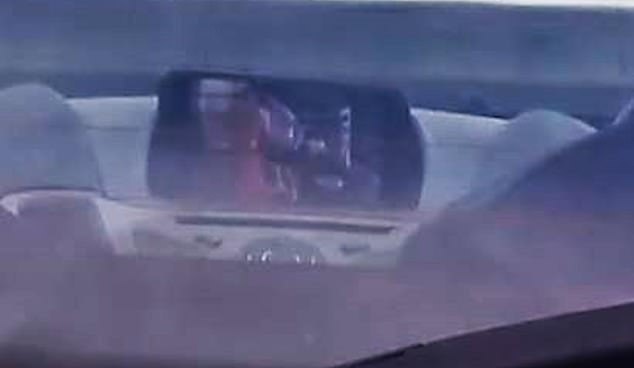 Rod Main said he spotted the driver watching a wrestling match on a screen perched on the dashboard of a Ford Fiesta after it came off the M8 and headed towards Govan, Glasgow 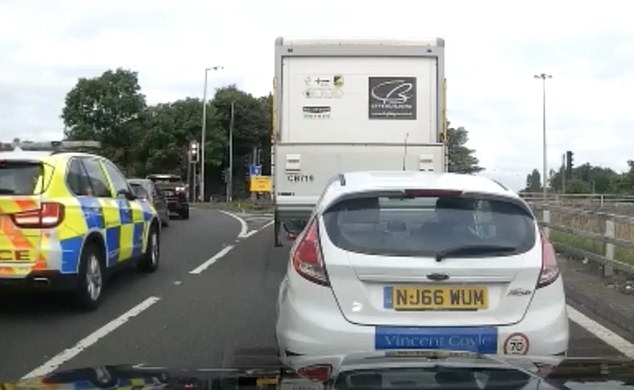 He said the motorist, who was driving a Vincent Coyle Plumbing car, came to a halt in traffic while watching a wrestling match on a screen on the dashboard.

Mr Main, an IT & Communications technician, captured footage on his dash cam while his colleague in the van also filmed further footage on his phone.

The video shows the white vehicle in front approaching a roundabout with the male driver in front apparently not paying attention to traffic around him.

A large lorry is shown moving in front of the Fiesta after he did not spot the green light.

A screen, which appears to be a mobile phone, can be seen on the Fiesta driver’s dashboard playing a wrestling match between two opponents.

A Police Scotland SUV then pulls up in the lane to the left of the car but does not appear to notice the driver or the footage being played on the phone screen.

Mr Main said: ‘I was travelling into work with a work colleague, as usual sitting in the long queue of traffic awaiting the traffic lights to change to green so I could proceed on to Helen Street in Govan. 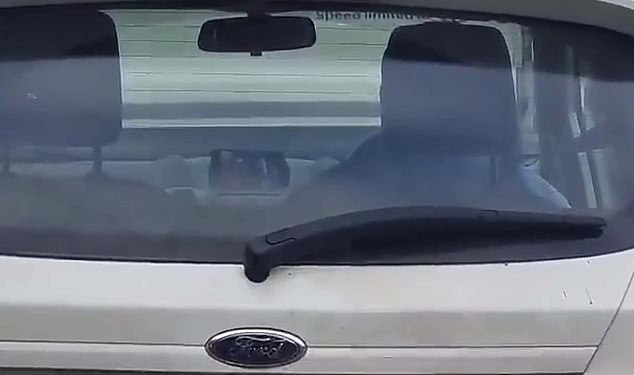 ‘Meaning we had to wait till the next light change before we could all complete our onward commute.

‘It was ironic that a traffic police car pulled up alongside him at the lights and it gave me a fright at the time as well.

‘You can also see he interacts with the phone whilst he pulls away from the junction as he moves on to Helen Street, Govan.

‘As he turned on to Helen Street, off the junction he reached over and pressed a few buttons on the screen before he drove off and out of my sight.’

Mr Main  shared the clip onto Facebook on Wednesday, writing: ‘Going into work this morning, off M8 slip road to Helen street Govan.

‘Idiot in front of me missed the lights and a HGV skipped in to a 50-metre space in front of him, on closer inspection he was watching a wrestling match streaming on his mobile phone…and not watching the traffic in front of him.’

One viewer joked: ‘Who was winning?’

Another added: ‘Dumb and dumber.’