A pair of yobs have been caught on camera breaking into a model village and kicking a beloved cat in the head.

Three figurines worth £80 were stolen from Southsea Model Village, Portsmouth, however it was a senseless act of animal cruelty that sparked outrage online.

The video, posted by the model village’s owner on Twitter, shows the two men about to pass a black cat – the village cat Rooney.

The pair abruptly stop and encourage the cat to come closer, before one of the men proceeds to boot poor Rooney in the head.

It’s been confirmed that the cat was checked today and that he is okay. 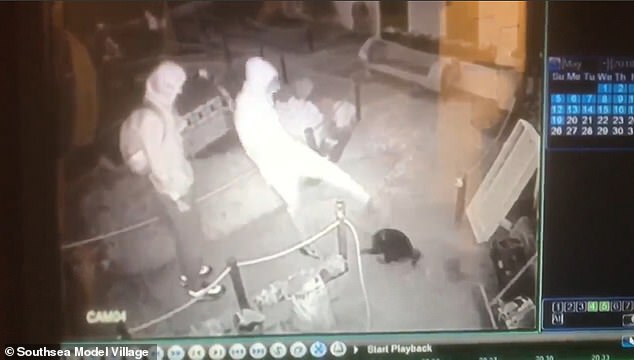 Mark Wilson, co-owner of the model village, urged people to come forward in the video description to help find the two men.

Mr Wilson told the MailOnline that he couldn’t believe someone would try to hurt Rooney. 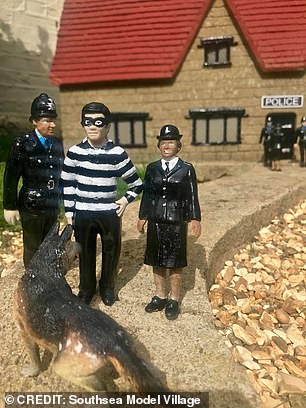 The three models that were stolen (pictured) are worth £80

‘It made me sick to my stomach to see that someone could be so cruel to a defenceless cat,’ he said.

‘The vile person even beckons the cat over before kicking it.

‘We think they have prior knowledge of the village as they knew where the CCTV cameras were.’

Twitter users were outraged at the wanton cruelty of the two men.

Another said: ‘Hope these idiots are locked away and key thrown away.’

One person suggested: ‘Think you need to get a dog to back Rooney up.’

A Hampshire Police spokeswoman said the theft had been reported by the model village owners and would work with the RSPCA on the animal cruelty concerns.

Rooney was checked over after the incident and he did not suffer any injuries. He posed for this photo on Monday

‘We work in partnership with the RSPCA on animal cruelty cases,’ she said.

‘The RSPCA is highly skilled at investigations and prosecutions in conjunction with the Crown Prosecution Service.’