Kinshasa: Alarming irregularities were reported from across Congo which, after more than two years of delays, went to the polls on Sunday in an election that holds both the promise of a democratic transition.

Millions of voters were met with non-existent voter rolls and hundreds of malfunctioning or missing voting machines, and hundreds of cases of election observers saying they were barred from polling stations. 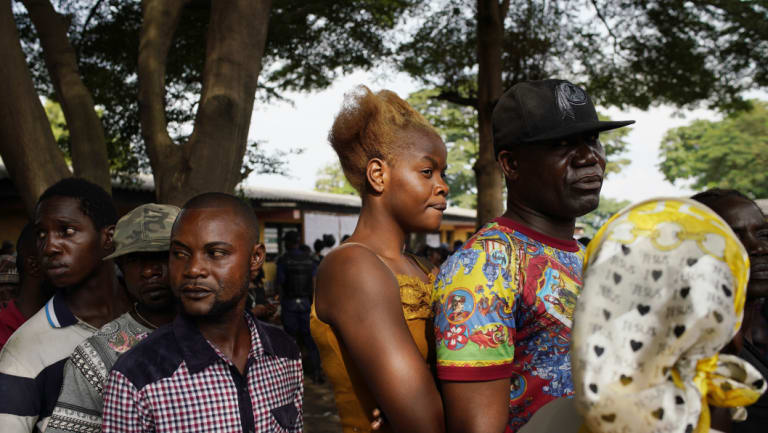 Some of the 40 million registered voters line up to vote in Kinshasa, Democratic Republic of Congo.Credit:AP

Vote counting began late on Sunday night, local time. The election commission says provisional results will be announced within a week and definitive ones by January 15.

The election presents this enormous country with its first chance at a peaceful, democratic transfer of power since its independence from Belgium in 1960.

But for some voters in the Limete neighbourhood, an opposition stronghold, many polling stations hadn't received voters rolls six hours after polls opened, and a few didn't have them by 5pm, their scheduled closing time.

"It's a comedy," said Kisoka Kimbenze, 52, around midday, after giving up and beginning to walk home. "But it is also a tragedy. The government has had years to organise this election, so of course the lack of voter rolls is intentional."

The election was initially scheduled for 2016 but was postponed multiple times by President Joseph Kabila due to unrest around the country and the logistical challenges of delivering voting materials when much of Congo lacks even the most basic transportation infrastructure. The delays allowed Kabila to stay in office far past his constitutionally mandated two-term limit.

Congo's election commissioner, Corneille Nangaa, said that long delays had affected polling stations serving approximately 35,000 voters in Kinshasa but did not offer an explanation for the mishap. As night fell, voters remained in line by the thousands, searching for their names on the rolls by flashlight.

Developments in the lead-up to the vote also contributed to a lack of public trust in its integrity. Just four days ago, voting was postponed until March in three cities due to ethnic unrest and an Ebola outbreak that has already been spreading for four months. Because the presidential election will be decided in January, the move disenfranchised more than 1.2 million voters. 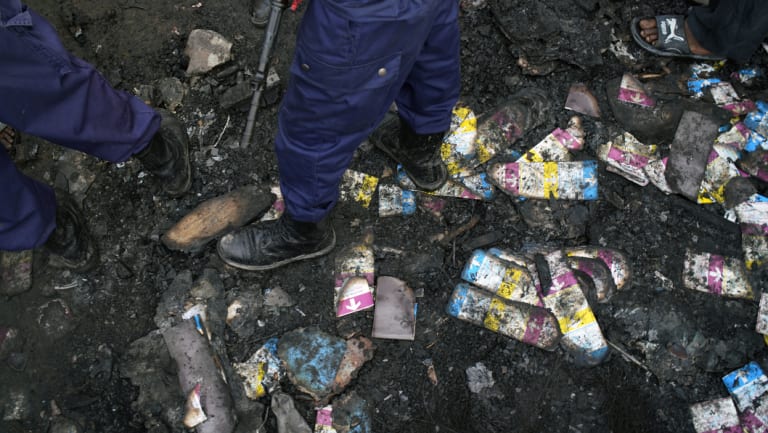 Police stand on burned ballots at the Les Anges primary school in Kinshasa. Voting was delayed when angry voters burned six voting machines angered that the registrations lists had not arrived.Credit:AP

Outside Kinshasa on Sunday, reports flowed in of polling stations that lack various materials, from the voting machines that are in use for the first time, to ballots and voter rolls. Congo's election commission has not responded publicly about the absence of material.

The Catholic Church's election observer mission said it received 544 reports of malfunctioning voting machines, 115 cases of election observers being kicked out of polling centres or not being allowed access, and 44 cases of vote-buying or corruption.

On Saturday night, the eve of the vote, the three main presidential candidates had been summoned by election observers to sign a document promising peaceful conduct. The candidates could not reach an agreement, and only the election commissioner and Kabila's chosen successor, Emmanuel Ramazani Shadary, ended up signing. The mission of the observers, who are from a group of Southern African countries, was one of the few that was accredited. They ended the mission after the failure to broker the accord.

After the meeting, Shadary told Reuters, "Tomorrow I will be president."