A wild video posted online shows the moment a massive fight broke out at a Waffle House in Texas at 4am between staff members and rambunctious customers.

The newly-released video, taken inside a restaurant in Austin last year, shows two women yelling at the Waffle House staff when one of them stands on the counter and a staff member throws a coffee pot at them.

Soon, the women start throwing items back at the employees before tumbled over the counter and an all-out fist fight began.

The professional wrestling-style brawl only ended when one young, female employee flawlessly caught a chair that was thrown at her with just one hand. 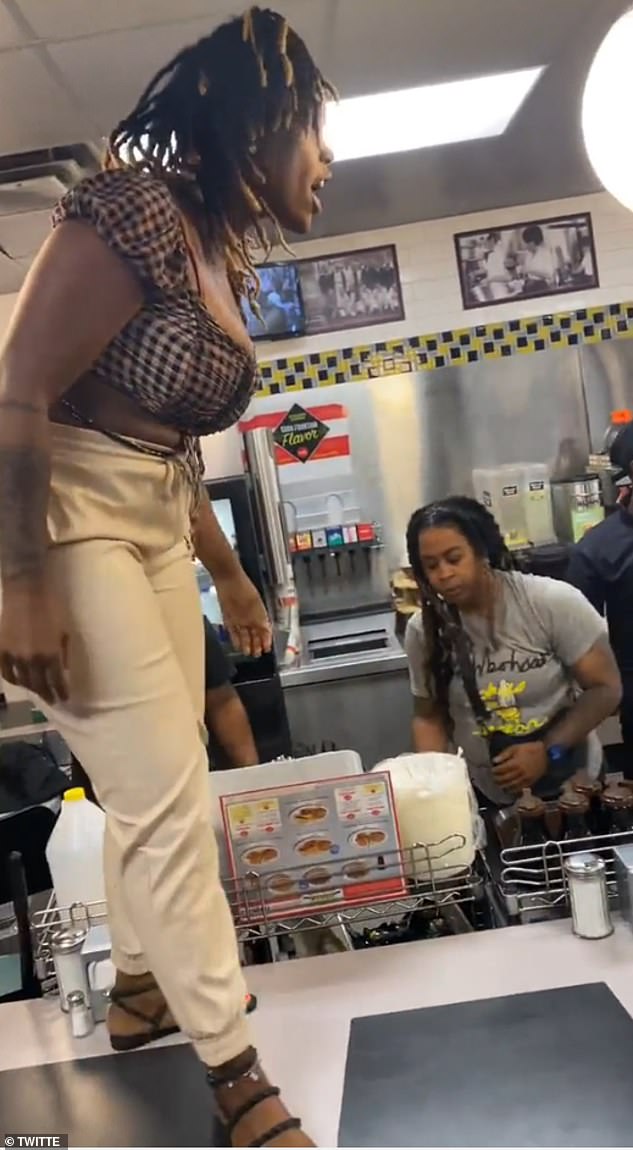 A fight broke out at a Waffle House, purportedly in Austin, Texas, after a disgruntled customer climbed on top of the counter while her friend snuck behind it 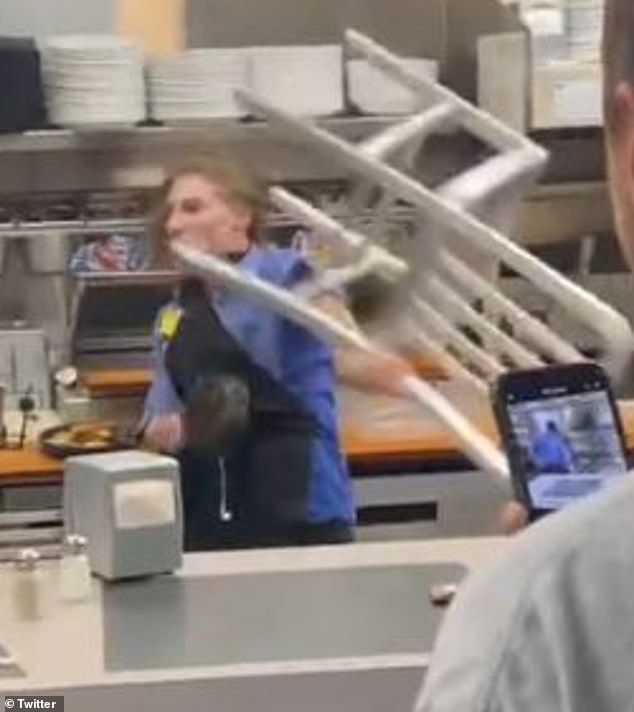 The fight only ended after a woman in a gray t-shirt flung a chair at an employee, who flawlessly caught it one-handed

It remains unclear what led up to the fight at the casual eatery. DailyMail.com has reached out to Austin police and Waffle House executives for comment.

The viral video starts with a group of patrons sitting at a table and yelling at an employee, as the man filming exclaims: ‘Bro, what the f*** is going on? Bro, I just want my waffles.’

At some point in the argument, a woman wearing a crop top and white yoga pants could be seen on top of the counter as one of her friends snuck behind it.

After the woman got off, a small, blonde employee threw a coffee pot at her.

That is when the woman’s friend, in a t-shirt, black leggings and yellow sneakers, climbs onto one of the stools at the counter and starts grabbing everything she can to hurl at the female employee.

But the friend, who had since decided to climb on top of the counter herself, then fell behind the counter — at which point the female employee grabs her and starts pummeling her before the girl’s friends and other employees try to intervene and separate the two women. 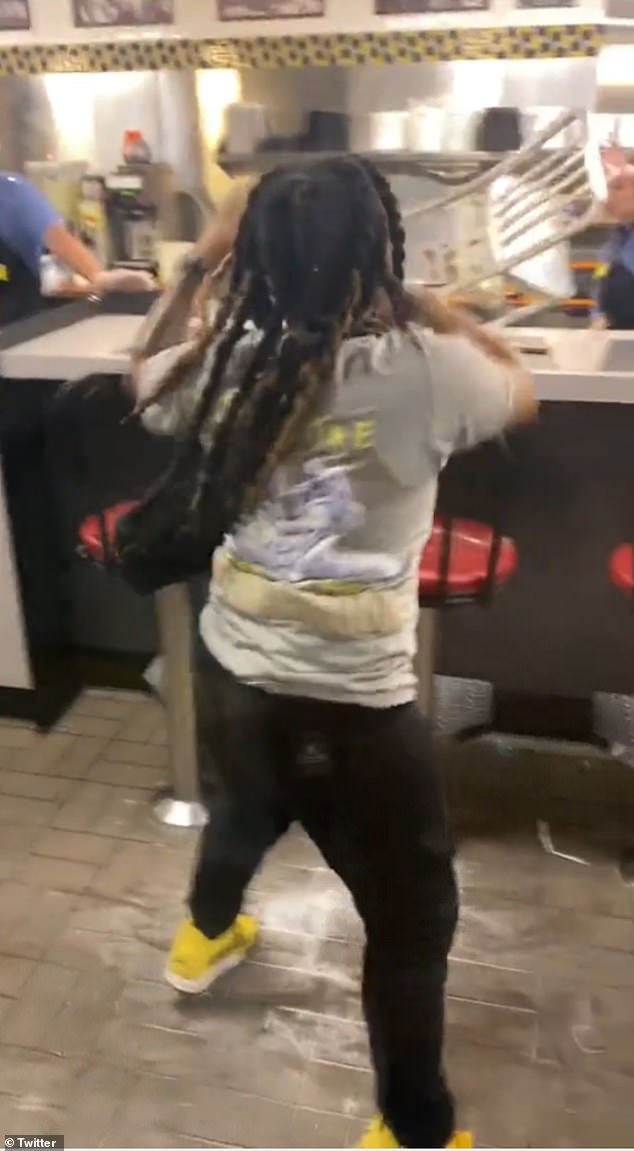 The fistfight sends other patrons running outside the restaurant out of apparent fear for their own safety, though they continue to watch the fight escalate from the windows outside.

There, they see that a third female customer has grabbed the employee by her hair as one of her friends continues to yell at the staff.

Soon, another female employee decides to get involved and hits the women herself, even though her male colleague is desperately tries to break the fight apart.

After a few moments, the man finally succeeds and the two women slink away, but not before the woman in a t-shirt grabs a bottle and threatens to throw it at the employees.

Instead, though, she and her friend walk away and grab some chairs, hurling it at the employees.

The female worker seems to tempt the raucous customers, waving her hands in a ‘Bring it’ fashion before the woman in the t-shirt hurls a chair at her.

But the woman, who is now being hailed as an ‘Avenger’ online, was able to grab it one handed and swipe it away. 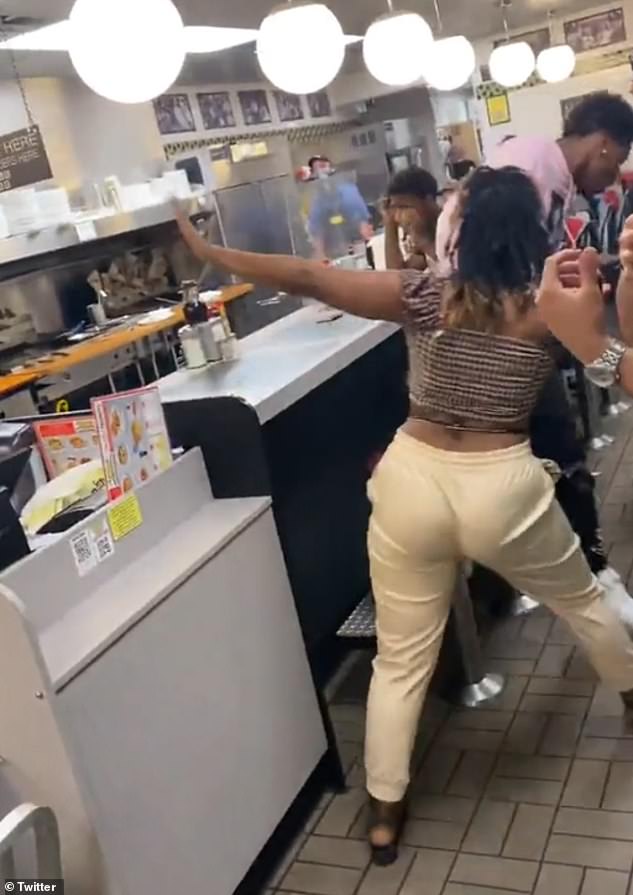 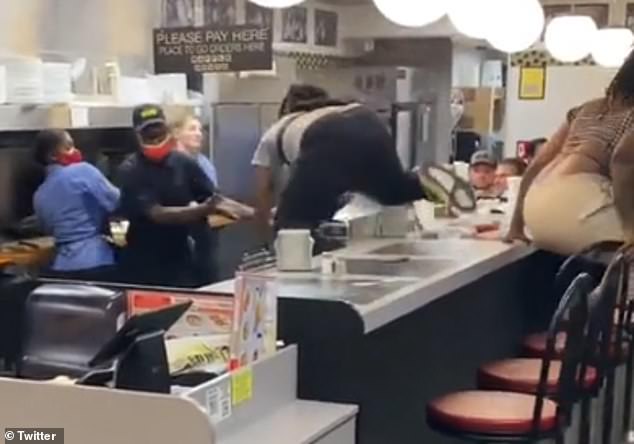 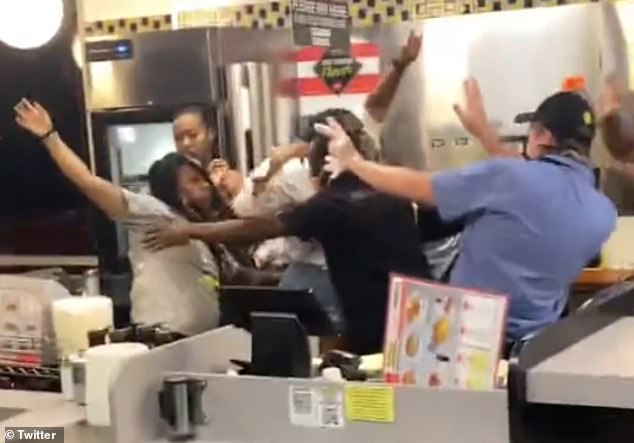 After the woman tumbled over the counter, a massive fist-fight between employees and customers ensued — prompting some customers to rush out the restaurant 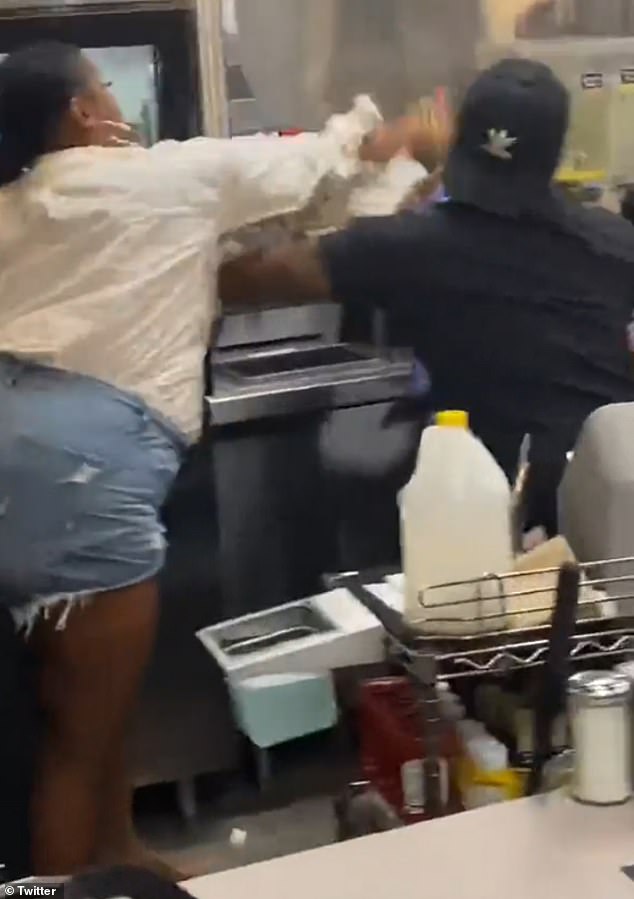 Soon a third woman got involved, who was seen pulling on the employee’s hair 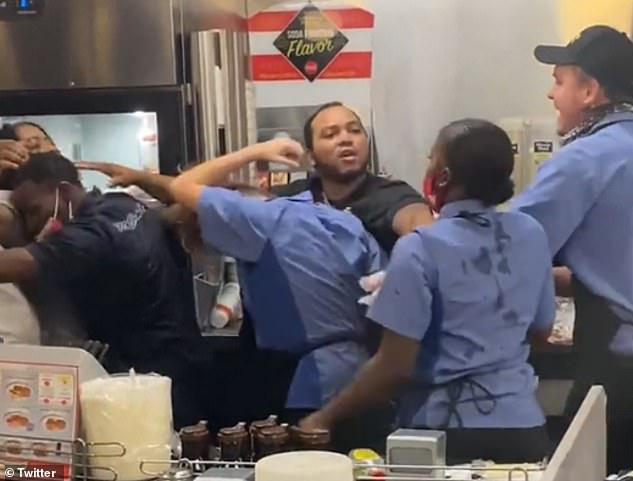 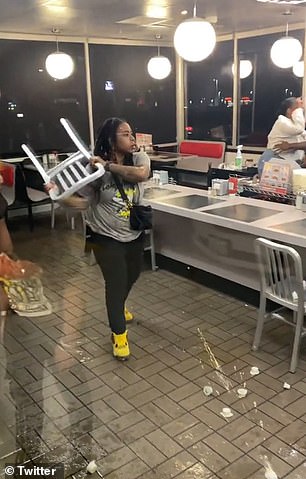 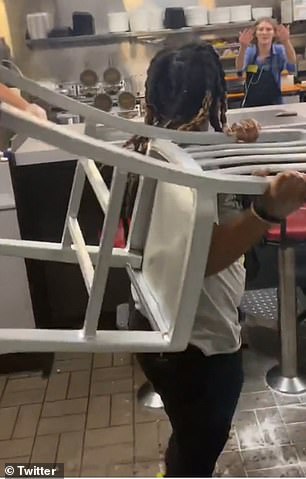 As the woman in the gray t-shirt walked away she flung a chair at the employee, who seemed to be tempting her on

The female employee is now being hailed as a hero online, with at least one Twitter user comparing her to an Avenger.

Another user wrote: ‘You would have a better chance at fighting an entire prison yard than throwing hands with the one white chic working the Waffle House night shift.’

Others, meanwhile, talked about how tough Waffle House employees are, with one person tweeting: ‘This is Waffle House training at its finest.’

Brad Williams added that Waffle House employees are like the sixth branch of the United States military, while another Twitter user said: ‘People need to understand that the counter at Waffle House is to protect users.’ 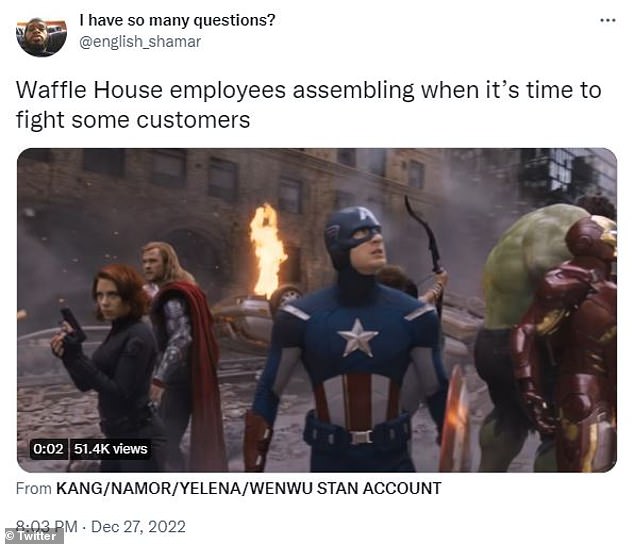 But the video was actually first recorded in September 2021 by Ray Baylor, he revealed to DailyMail.com.

He said he only decided to release it on Tuesday because he had heard of another brawl at a Waffle House recently.

Two people had been arrested in Georgia on Christmas Day after they allegedly threatened a Waffle House employee there.

Madison County police and deputies with the Morgan County Sheriff’s Office responded to the restaurant at around noon, the Morgan County Citizen reports, and when they arrived, they saw several people outside ‘yelling.’

Roderick Ramone Brown, 35, told officers at the scene he had placed a to-go order and when he was given the food it did not correspond with what he had ordered, leading to a verbal argument with the manager.

The manager said she offered Brown a refund, noting that there were children inside the restaurant at the time, but when she stepped outside with Brown, Alexis Shaianne Smith, 27, tried to swing at her.

Smith then started ‘acting belligerent’ when a deputy tried to speak to her about the incident.

Both Brown and Smith were arrested in the aftermath for disorderly conduct.

It remains unclear whether anyone was arrested for the brawl in Texas.