Los Angeles: A former actor on the zombie apocalypse TV series The Walking Dead has described how he may have picked up the coronavirus in Australia and was hit with a $US9116 ($15,736) medical bill on his return to the US.

Daniel Newman, 38, was in Australia from February 25 to March 3 to take part in the Sydney Gay and Lesbian Mardi Gras with fellow celebrities Sam Smith, Dua Lipa, Kesha and thousands of other revellers from around the world. 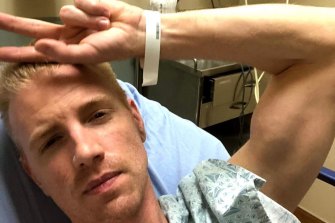 Walking Dead star Daniel Newman has been hospitalised with suspected coronavirus. The actor has not been tested but believes he was exposed to Covid-19 while he was in Sydney for Mardi Gras. Credit:Instagram

The American actor had a minor cough in his final week in Australia but presumed it was a common cold and endured the long flight back to the US with a coughing passenger sitting directly behind him.

"Going for walks with my dog would leave me out of breath.

"I coughed at night and had difficulty breathing when I tried to sleep. 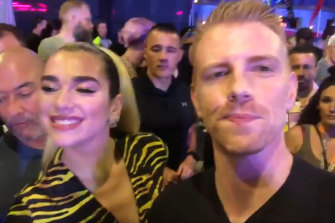 "I heard news that someone in my Mardi Gras group tested positive for the coronavirus."

Newman described how when he arrived in his home city of Atlanta he called his doctor and urgent-care clinics seeking a coronavirus test but had no luck.

On March 14 he drove to a hospital that had a tent set up next to the emergency room.

The tent had a line of potential coronavirus patients waiting to get their temperatures taken.

Newman said most patients were told to go home and self-quarantine but when a nurse recognised him from The Walking Dead she gave him "preferential treatment".

He was admitted to the ER where he was tested for the virus.

The actor was told to go home, but not because he tested negative.

Newman never found out if he had coronavirus.

He said the doctor told him "the government won't allow us to process your samples" because of limited capacity.

He could breathe on his own so was not deemed a "severe" case and was sent home.

"As I checked out of the ER, they told me I'd be responsible for the bill of $US9116, even though they never processed the coronavirus test," he wrote.

The actor, who played the character of Daniel on The Walking Dead from 2016 to 2018, compared the coronavirus pandemic to the show's storyline.

"The Walking Dead is one scenario of the apocalypse: Society shuts down, stores are ransacked, and the power goes out," he wrote.

"No one can go to work, no one can function.

"The echoes of my acting work in today's world are eerie.

"We have to find a way to survive – and to be prepared for what's next."