Revealed: Wallis Simpson’s divorce that allowed her to marry Edward VIII nearly wasn’t granted because the hotel her husband chose for his staged affair was considered ‘too exclusive’ 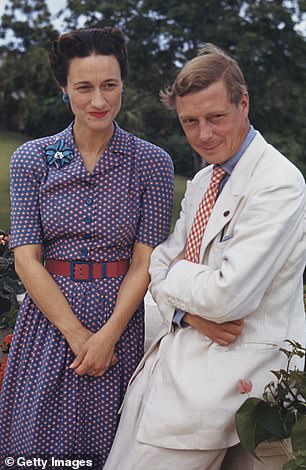 More than eighty years have passed since Wallis Simpson was granted the controversial divorce that freed her to marry Edward VIII. The couple are pictured above

More than eighty years have passed since Wallis Simpson was granted the controversial divorce that freed her to marry Edward VIII.

But new papers have revealed the proceedings were nearly scuppered – because the hotel chosen for her husband’s staged adultery was too exclusive.

The American socialite divorced her second husband Ernest Simpson in 1937.

But due to the strict laws of the day, the couple had to make it look as if one of them had been unfaithful to have the separation legalised – and it was common for the man to volunteer.

Now a private memoir, published yesterday, has revealed how the attempt to stage-manage an affair between Mr Simpson and another woman descended into farce.

The hotel chosen for the set-up turned out to be too protective of its guests’ information – and meant investigators found it too hard to gather evidence of the affair.

The memoir comes from the family of Robert Egerton, a solicitor for Theodore Goddard & Co, which represented Mrs Simpson in the 1936 case.

His papers, published by The Guardian, reveal he helped stage the ‘adultery’ at the high-society Hotel De Paris in Bray, Berkshire – an episode he describes as a ‘judicial farce’. 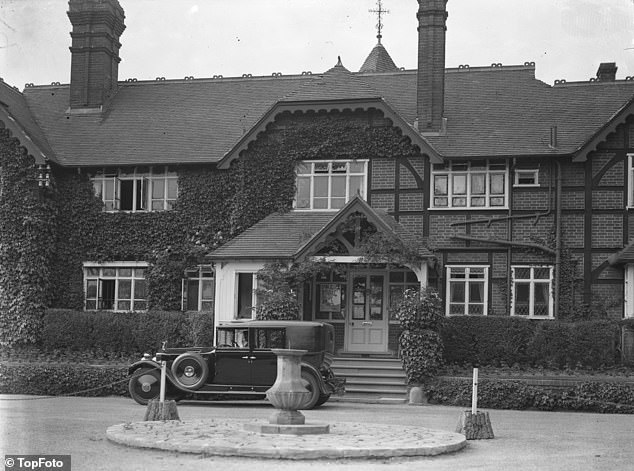 The hotel chosen for the set-up (Hotel de Paris in Bray, Berkshire, above) turned out to be too protective of its guests’ information – and meant investigators found it too hard to gather evidence of the affair

Mr Simpson, he was told, had taken a room with the ‘woman named’ – the technical description of the woman with whom adultery was alleged in a divorce petition.

Normally an ‘inquiry agent’ would ‘call around with photographs, inspect the register and take a statement, which would eventually satisfy the court’s requirements for an unopposed decree nisi’, he recalled in his memoir.

This would be enough evidence to ensure a court would allow a divorce.

But in this case, the ‘beautifully stage-managed production’ hit a snag when staff ‘refused all co-operation’ to the inquiry agent and he ‘came away defeated’.

It turned out the hotel was too accustomed to protecting the privacy of regular high-profile guests.

Mr Egerton wrote: ‘This was one of those expensive hotels which was patronised by society… who did not want the public to know where they were to be found or who their companion was.’

But the law firm’s managing clerk, Mr Barron, threatened staff with prosecution unless they showed him the register of their guests.

‘Once it had become obvious that publicity of one kind or another could not be avoided, the hotel gave Barron access to the staff and he came away with statements from the hotel porter, a waiter and the floor waiter who had served breakfast in bed to Mr Simpson and a woman who was not Mrs Simpson,’ Mr Egerton wrote. 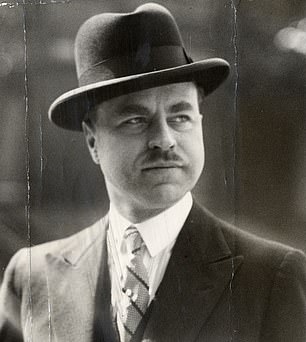 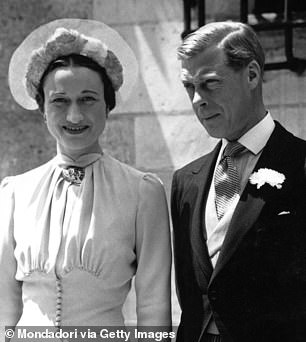 The American socialite divorced her second husband Ernest Simpson, pictured left, in 1937. Edward VIII is pictured right with Wallis Simpson on their wedding day in June 1937

Desperate to avoid ‘unsavoury publicity’, the hotel subsequently sacked the staff, leaving the law firm to pay for accommodation and support for their key witnesses.

The night before the hearing in Ipswich, the lawyers had to search the town for one of the waiters, who wandered off to find more drink.

However, the case proceeded well and the judge was forced to award costs against Mr Simpson.

Edward VIII renounced the throne in 1936 in order to marry Mrs Simpson, who was thought unfit to be Queen, having been married twice.

Mr Egerton recalled: ‘[Edward] was passionately in love with Mrs Simpson and, with reckless disregard of the consequences, had secured her company on a cruise and at Balmoral. Who could be blamed for assuming that there had been sexual intercourse?’