Sharon McLennan’s family’s recorded history starts as a ripping yarn of outback adventure torn from the pages of the 1908 Australian classic We of the Never Never by Jeannie (Aeneas) Gunn which sold a million copies around the world.

Yet what started as an adventure for Ms McLennan’s great-grandfather John Joseph McLennan, a stockman called the Sanguine Scot in Mrs Gunn’s book, evolved into tragedy for the descendants of his marriage to Nellie, an Indigenous woman, also featured in the book. 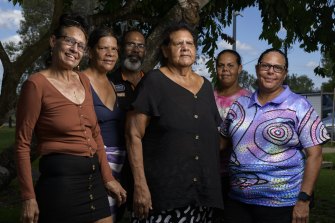 Sharon McLennan, left, with her mother Irene and sisters at a family picnic in Darwin. Credit:Rhett Wyman

Since 1994, Ms McLennan has been campaigning for compensation for Stolen Generation survivors in the Northern Territory, including her mother, Irene, 74, and her late father John, and her grandparents, William (the son of the Sanguine Scot) and his wife Agnes.

She is now part of the class action filed by law firm Shine Lawyers in the NSW Supreme Court in April, seeking millions in damages.

As another Sorry Day is marked on Wednesday, Ms McLennan has had enough.

“It’s been going on for so long, to the point where they are dying,” she said of the elders in her family. “My dad’s had to go to his grave without any compensation. We got that damn sorry from Kevin Rudd but that didn’t touch most people.”

Assimilation had also eroded her Indigenous culture. “With white policies and laws that we were forced to live by, we’ve lost our own culture and language,” said Ms McLennan.

Her mother, Irene, told the Herald that she was taken from Ti Tree in central Northern Territory after her own mother died, and was shifted from one home to another. At age seven, she was promised “a pretty little boat ride” but that took her to a Catholic mission orphanage on Melville Island.

It was there that she was matched up with her future husband, John, who had also been removed from his family at age three. They were given limited education and trained to work as house staff for white families. 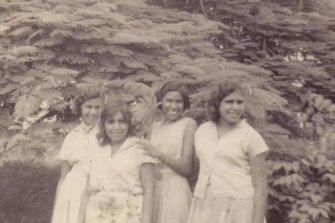 Irene McLellan with a group of other girls at the convent on Melville Island where she lived as a young woman after being taken from her family.Credit:McLennan family

Irene said her non-Indigenous father, Ronald Edwards, had kept in touch and sent presents to her in the orphanage. Later he was told by authorities that his daughter was dead. It took nearly half a century before they discovered the truth.

Shine Lawyers Special Counsel Tristan Gaven said an estimated 4000-6000 people were eligible to register for the class action. The first hearing is scheduled for June 17 in Sydney.

Every other state and territory had compensated Indigenous Australians who were victims of the Stolen Generation, yet nothing had yet been offered to those in the Northern Territory, he said.

“The Commonwealth was responsible for tearing apart Indigenous families in the Territory and it’s up to the Commonwealth to make amends,” Mr Gaven said. 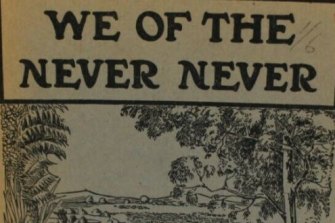 Sharon McLennan’s grandfather was known as the Sanguine Scot, a stockman in Aeneas Gunn’s famous book We of the Never Never. But many of his children and great grandchildren were forcibly removed by the NT government because they were half caste.

The “impact of these past government policies has started a vicious cycle of intergenerational trauma that requires extensive support and assistance,” she said.

Ms Jordan and others warned of not repeating the mistakes of the past. The number of Aboriginal children in out-of-home care across Australia is set to double by 2029, fomenting a new and growing crisis of child removals.

As proud as she was of her Aboriginal heritage, Ms McLennan said she was proud of her great-grandfather, the Sanguine Scot. “He was one of those rare men that wasn’t racist, who loved native people, as they were called then. He must have learned a lot from them.”

She said Sanguine Scot never returned to his non-Indigenous family in Victoria.

Ms McLellan was also proud to be part that her family was connected to We of the Never Never and the story of Elsey station near Mataranka, a tourist attraction on the road to the Gulf of Carpentaria about 400kms south east of Darwin.

Mrs Gunn’s book covers the first year of her life as “Missus” of Elsey. She wrote it was a
“land of dangers and hardships and privations yet loved as few lands are loved—a land that bewitches her people with strange spells and mysteries, until they call sweet bitter, and bitter sweet.”