Would you get a vaccine if Jimmy Barnes urged you to? What about ABC’s Dr Karl? Ash Barty? Sam Kerr? Peter Hitchener? Amanda Vanstone?

After a survey this week published by The Age and The Sydney Morning Herald revealed almost one-third of Australian adults say they are unlikely to be vaccinated against COVID-19, the pressure is on the federal government to come up with a snazzier campaign to get Australians to roll up their sleeves.

The federal Health Department has funded a series of no-nonsense short video ads featuring former deputy medical officer Dr Nick Coatsworth and other clinicians, however communications experts say the government needs to go back to the drawing board.

“Old white blokes with stethoscopes around their neck, or sitting, giving a courtyard appearance in a press conference? Well, that might influence old white blokes… but it doesn’t reach the people you need to reach,” says Bill Bowtell, Adjunct Professor at the Kirby Institute who was heavily involved in the HIV/AIDS campaigns of the 1980s. 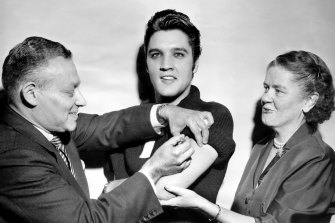 Elvis Presley receiving a polio vaccination backstage at the ’The Ed Sullivan Show in 1956.Credit:Getty

Famous faces and quirky methods have long been used to promote health campaigns. Elvis Presley famously received a polio vaccination backstage on the Ed Sullivan show in 1956, while Theodor Geisel – who became famous as children’s author Dr Seuss – was creating cartoon pamphlets for troops in WWII to inform them of how to protect themselves from malaria. 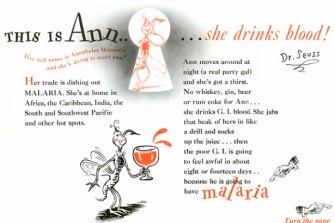 WWII campaign to protect against Malaria featuring Ann the mosquito by the man who would become known as Dr Seuss.Credit:Dr Seuss

Overseas recently Elton John, Michael Caine and Dolly Parton have all lent their stardom to the coronavirus vaccine cause in viral videos and TV ads.

So who should be the face of Australia’s vaccine rollout?

It all depends on who you’re trying to target, according to pop culture expert Dr Lauren Rosewarne, Associate Professor in the School of Social and Political Sciences at the University of Melbourne.

“When Elvis Presley did the polio vaccination that was incredibly influential, so who’s our Elvis Presley today? I don’t think we have just one, I think what we have to do is think about who are the trusted figures in each of the demographics who are vaccine-hesitant.”

While Dr Rosewarne said someone like Melbourne-based Channel 9 newsreader Peter Hitchener would likely appeal to people over 50; Gen Z and Millennials would probably take more heed from TikTok or Instagram influencers.

“We’re going to need a grab bag of different messages, and ways to message,” she said.

Epidemiologist Mike Toole from the Burnet Institute said surveys had shown women between ages 30 to 50 had been found to show higher levels of vaccine hesitancy than others, and suggested sports stars like Ash Barty, Sam Kerr or Lauren Jackson could be good vaccine ambassadors.

Professor Toole said the new poll also showed there was rising worries among women over 55, most likely driven by concern about the safety of the AstraZeneca vaccine.

“So I think of more general appeal, particularly in my age group is Magda Szubanski and she’s proven to be a communicator with masks… Barnesy [Jimmy Barnes] would be great,” he said.

But Dr Rosewarne said she believed the ads being seen as political should be avoided.

“When you think of the science people that we trust, for example, everyone loves Dr Karl [Kruszelnicki], because Dr Karl doesn’t feel like he’s pushing a political barrow,” she said.

“You want people who are likeable, neutral and a health message that’s not being rammed down people’s throats.”

She said Dolly Parton was the perfect example of an apolitical figure with wide appeal.

“Dolly’s appeal doesn’t make sense on so many levels – yet young people find her this incredibly sweet charismatic grandma and she appeals to conservatives because this is where she’s from – she’s from the rural heartland where there’s poor people,” she said. “We need our own Dolly.”

Get our Coronavirus Update newsletter

Stay across the news you need to know related to the pandemic. Get it every Monday.