Omicron in NSW is causing what commentators say is its signature look – a close-to-vertical upwards line of cases. It makes for a striking graph.

Daily infections in the state have risen 10-fold from 251 at the start of December when Omicron was initially detected, to pandemic records of more than 2500, as the virus spreads with unprecedented speed when Australians are eager to finally move on with their lives. 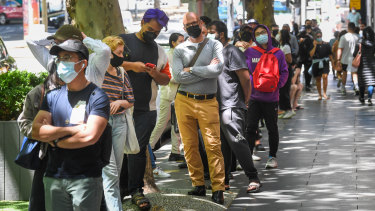 Anyone from the Prime Minister down will tell you that the real measure of the seriousness of the COVID-19 situation is the number of people so ill that they need to go to hospital or receive medical care.

As NSW Premier Dominic Perrottet said on Monday, the 33 current ICU presentations was the “key metric for the state”.

But despite a persistent narrative that Omicron may be milder than previous strains, scientists say they don’t actually know this yet.

This means we don’t know how many of these thousands of new cases will develop into serious bouts of illness needing medical care, and how at risk our hospitals are of being pushed beyond the brink.

Crucially, even if Omicron is milder, even significantly so, the virus is spreading to so many people so quickly that it could result in more people getting severely unwell from COVID-19 overall due to the sheer number of people with the disease.

In the UK, cases are now at daily pandemic records of more than 80,000 and Dr David Nabarro, a special envoy on COVID-19 for the World Health Organisation, said last week he’d never been more concerned.

“Even if Omicron is several times less unpleasant than Delta, I want to stress the absolute number of people who are going to get infected … is going to lead to an already massively stressed health system and health workforce being further overloaded,” he said during a television interview.

The timing isn’t great. Christmas and holiday gatherings may give Omicron ample opportunity to spread from the young and social to vulnerable family members, when we still don’t know the most critical thing about it – how likely it is to make them really sick.

There are 37 confirmed cases of the variant in Victoria.

In NSW, where Omicron is now believed to be the primary strain of COVID-19, the number of people in hospital has jumped 50 per cent to 261 patients in a week as daily cases have soared more than 300 per cent to 2501.

While some have jumped on the comparatively small increase in hospital cases as a sign Omicron could be less dangerous, experts say there’s always a lag between new infections and people falling ill.

”There’s evidence that this is certainly a problematic variant, and I would be treating it as such until we have a clearer picture of severity. I don’t know if I would be thinking it’s going to be overwhelmingly less severe than Delta,” said Professor Jamie Triccas, head of infection and immunity at the University of Sydney.

Professor James McCaw, a member of the Australian Health Protection Principal Committee, says it will probably take between one and three weeks to get a clearer picture of the severity of Omicron.

The problem is, he said, we can’t wait until then to act, as daily cases are at risk of growing 30 times higher.

“There’s a huge potential for the case numbers to be at unprecedented levels by the time we do know about severity … and we would have lost the opportunity to minimise the impact.”

Professor McCaw said those eligible for a booster should get it as soon as possible, masks should be worn in indoor public places and large gatherings indoors such as nightclubs needed to be halted, to help avoid lockdowns later.

This has all come as Australia’s most populous states have been quite firmly on the path of loosening restrictions; it would be a big call to reimpose even moderate ones. It’s hard to imagine that the NSW or Victorian governments would be able to weather declaring another lockdown.

In Victoria in particular, where Melburnians have spent more than 260 days in lockdown, people feel like they have done their time and want to put COVID-19 behind them, but Omicron doesn’t have regard for that.

It’s potentially a dangerous position, if politicians tasked with making the big calls on restrictions feel like they are running out of political capital, that would allow them to freely adopt public health advice.

Boosters are looking like they can drastically reduce the number of people who catch the variant. A number of initial laboratory and real-world studies indicate that while two doses of AstraZeneca or Pfizer provide limited to low protection against infection, that rises to around up to 80 or more with an mRNA booster.

But Australia has just started its booster program, and just at the point that it needs to ramp up, there were plans to shut down mass vaccination clinics and some pharmacists and doctors are reporting they are struggling to keep up with demand, or planning to close down for Christmas.

There are some early signs two doses of vaccine can still do their key job, and prevent severe disease at high rates.

Many epidemiologists have been emphatic in their opinion that the NSW government has made the wrong choice in deciding to press on with loosened restrictions as COVID-19 case numbers shoot up. In contrast to Victoria, where masks remain mandatory for indoor shoppers, masks are no longer required in most indoor settings in NSW from last week.

Infectious diseases expert Professor Robert Booy told political correspondent James Massola: “The restrictions in NSW are being unwound too quickly. We are now ideologically driven and the public health advice has become secondary.”

Others in the field are now saying the decisions that governments and individuals make in the next couple of weeks could be the difference between being forced into new lockdowns in the future, or avoiding that.

They are asking the public to use a rapid test before visiting family members on Christmas, to limit the length of their gatherings and hold them outside whenever possible.

“I’m deeply concerned about this,” said Professor McCaw. “I would urge everyone to get their booster as soon as possible, and modify their behaviour in ways that keep themselves and their community safe.”

Stay across the most crucial developments related to the pandemic with the Coronavirus Update. Sign up for the weekly newsletter.