Wetherspoon’s customers have been left disappointed after the pub chain served pigs without blankets as part of a Christmas lunch at ‘a number of pubs’.

It blamed the issue on a temporary labour shortage at an unnamed business further up the supply chain, not on meat travelling into the UK from Europe.

Upset customers hit out at the chain saying it was a ‘disaster’ with some parents claiming their children had been left ‘crying’ as a result.

The matter involved a ‘number of pubs’ and has since been resolved, the company said. 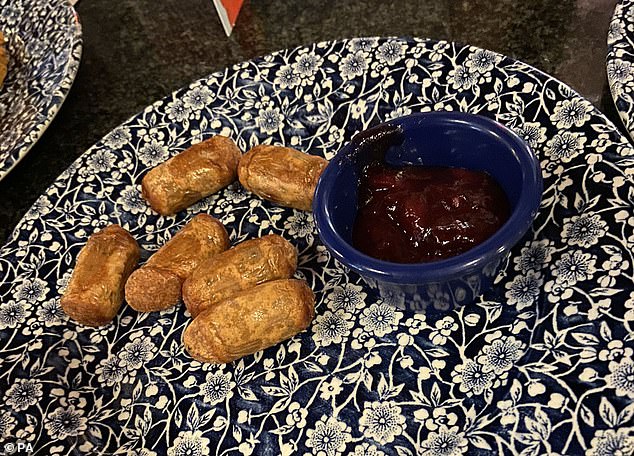 Customer Xander Yarney, 21, was among those left disappointed when he ordered a Christmas dinner at The Angel in Basingstoke on December 2 (pictured, his meal) 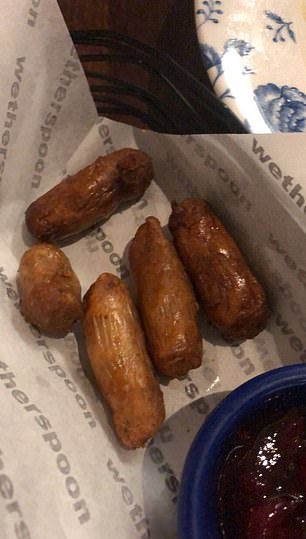 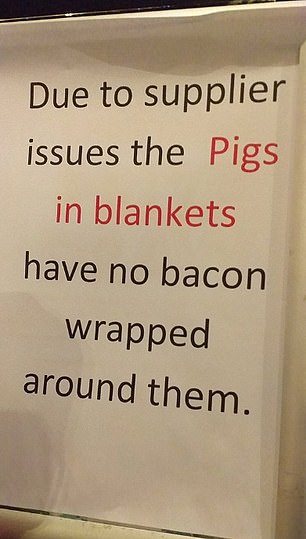 Other customers, including Skye Tracey in York (left) said they too had been left without pigs in blankets and were instead served sausages. Signs were put up in some of the pubs (right)

Dozens of Wetherspoon fans have spoken on Twitter about the shortage, some labelling the incident a ‘disaster’ (above and below)

Customer Xander Yarney, 21, was among those left disappointed when he ordered a Christmas dinner at The Angel in Basingstoke on December 2.

He said: ‘I ordered them through the app and when they got delivered to me they didn’t have the bacon on them.

‘Matey asked me if I wanted a refund and I said not to worry about it.

‘Obviously was a bit disappointed, I mean who wouldn’t be? But I kind of just found it funny more than anything so I gave it no stress, ate them and then went about my day.’

The pub chain, whose boss Tim Martin has repeatedly spoken in support of Brexit, said the issue had nothing to do with problems with meat travelling into the UK from Europe but instead was down to a labour issue at a supplier.

Other customers, including Ali Mahoney, a probation services officer, said: ‘Disaster at Wetherspoons this morning! What do you call pigs in blankets with no blanket? Pig?’

While another, Skye Tracey,, added: ‘Pigs in blankets in Wetherspoons in York, I see no blankets.’

The issue has garnered such interest it was briefly trending on UK Twitter, with some users pointing towards Mr Martin’s support of Brexit (above and below)

And Andy Churnwell said: ‘My demands are clear. I want pigs in blankets and I want them now. Otherwise I am going to headbutt the windshield of my Yaris in an hysterical frenzy of irrepressible rage.

‘I’ve done it before. I won’t hesitate to do it again. Why have you forsaken me, Tim #Wetherspoons?’

Wetherspoon’s spokesman Eddie Gershon said: ‘It has all been resolved, it wasn’t across all 900 pubs and it was only for a day or so.

‘There is no shortage of meat. The suppliers in the UK had the bacon and the sausages but didn’t have enough labour to put the blankets on the pigs.

‘There was a stop in some supplies, they got the sausages in without the blankets.’

The British Meat Processors Association previously warned that the UK was not attracting enough EU workers, which it said could have a detrimental impact on the supply of ‘fiddly’ items, such as pigs in blankets.

Last year, Wetherspoon’s was temporarily unable to serve some drinks on draught due to a shortage of CO2, while the absence of steak on its steak night menu was put down to a precautionary product recall due to mislabelling with the supplier.