Last week in Taipei, Taiwan, a mask-wearing man behind the counter at 7/11 thrust a cardboard box towards me, full of folded pieces of red paper. It was a lucky dip rewarding me for buying hand sanitiser, and I won a free coffee.

At times sobering, at times a little cheesy, signs of Taiwan’s fight against the COVID-19 pandemic have been ubiquitous since January, when other countries were losing precious time.

Garbage trucks have replaced their usual jingle of Beethoven’s Fur Elise with messages cajoling citizens to call a health hotline if they’re feeling ill. Check points at office buildings, night markets, bus stops and schools take the temperature of those entering and spray their hands with alcohol. Buses and taxis have clipboards showing how many times they have been disinfected that day, and elevator buttons are covered with plastic film that is regularly replaced. 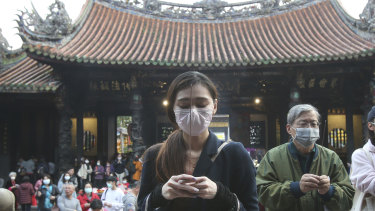 People wear face masks to protect against the spread of the coronavirus as they pray in Taipei, Taiwan.Credit:AP

Before the World Health Organisation confirmed human-to-human transmission on January 20, it seemed over-the-top that so many people on the street were wearing masks. But for the island of 23 million people, early intervention and a well-oiled command structure have so far fended off the tragedy other countries are beginning to see.

While Australia’s reported cases raced to 350, Taiwan has kept its cases to 59, 20 of them recovered, with one death. Schools and workplaces are running mostly as normal, face masks are rationed but widely available, and supermarket shelves have enough sanitiser and toilet paper for everyone.

Taiwan learned hard lessons from the SARS epidemic of 2003, which killed 37 of its citizens, sickened a reported 346 and pounded its economy. Most of its SARS cases were traced to one hospitalised man who was misdiagnosed for five days, infecting other patients and staff before he died.

Less than 200 kilometres from the coast of mainland China, Taiwan again faced worse odds than most other countries this time around. Close to 1 million of its citizens live in China, with hundreds of daily flights ferrying businesspeople and tourists across the Taiwan Strait. COVID-19 came when thousands were planning to return home for the Lunar New Year.

On New Year's Eve, the day China notified the WHO of mysterious new cases of pneumonia, Taiwanese officials began boarding flights from Wuhan, checking for fever and other symptoms before passengers could leave their planes.

One of the CECC’s earliest steps was to ban the export of face masks and divert funds and military personnel to boost production. The Taiwan Tobacco & Liquor Corporation and the Taiwan Sugar Corporation, both state-owned, increased production and imports of high-proof alcohol as demand for sanitiser soared.

Travel from China was restricted, but not banned, with regular Taiwan-bound flights from five Chinese airports as long as passengers submitted to testing and then quarantined themselves at home for 14 days. Mobile tracking apps, random visits and steep fines enforced these rules, and those who showed symptoms were immediately taken to negative-pressure isolation rooms. 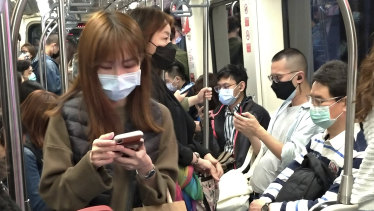 Impressively, Taiwan’s national health insurance database and its immigration and customs database were integrated over the course of one day, and this data was used to generate real-time alerts when patients with a risky travel history visited clinics presenting suspicious symptoms. This same database allowed border guards to issue low-risk travellers border passes via SMS, while ordering higher-risk travellers to self-isolate.

Authorities also sought out patients who had recently shown symptoms and tested negative for influenza, and re-tested them for COVID-19, finding one positive case out of 113.

There are a lot of other examples of the community diving in to help. Research institutions collaborated on an open forum to develop and improve testing reagents. The private sector ran with a live information platform created by health authorities to write more than a hundred programs and apps for finding locations with face masks in stock.

Aside from Taiwan, credit is also due to Hong Kong and Singapore which faced similar challenges and also appear to be bringing the virus under control. Together they have shown that early, decisive and comprehensive action can deliver the best chance of turning back the tide.

Taiwan is around half the size of Tasmania, and naturally not all of its measures will be applicable to other counties. But if one good thing comes of this pandemic, it will be that Australia and other countries learn from COVID-19 in the same way Taiwan learned from SARS.

Ben Hurley is an Australian journalist living in Taiwan.