PC Andrew Harper's mum said the family "will never recover" after he was killed on August 15 while responding to a reported burglary.

Here we look at the events surrounding the death of brave officer PC Harper as four more people have now been arrested on suspicion of his murder. 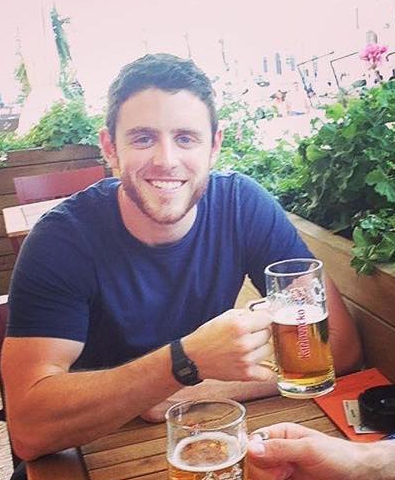 Who was PC Andrew Harper and when did he get married?

PC Andrew Harper was killed while attending a reported burglary in a rural area of Berkshire.

The 28-year-old officer died after he was allegedly dragged along a road by a vehicle in Sulhamstead, Berkshire on August 15.

He had married his sweetheart Lissie Beckett just four weeks earlier at Ardington House in Oxfordshire.

He gave his wife a touching message when they married and it said: "Life is slippery. Here, take my hand."

The officer sent the romantic card to Lissie on the morning of their big day to mark their commitment to each other.

Lissie, also 28, was pictured beaming as she read the card containing the quote from American author J Jackson Brown Jnr moments before walking down the aisle.

Andrew died a week before he was due to go on holiday.

Andrew is the first police officer to die on duty since Westminster PC Keith Palmer in March 2017.

Who has been arrested in connection with the police officer's murder?

On September 17 four people were arrested on suspicion of murdering PC Harper.

Three of those arrested – an 18-year-old man and two 17-year-old boys – are from the Reading area and were originally detained on August 16.

They were released on bail until September 12, then re-bailed until 16 November.

A fourth suspect, a 21-year-old man, was arrested for the first time after cops swooped on a traveller camp on the outskirts of Basingstoke, Hants.

And 20-year-old Jed Foster was charged with the PC's murder, appearing in court in August. 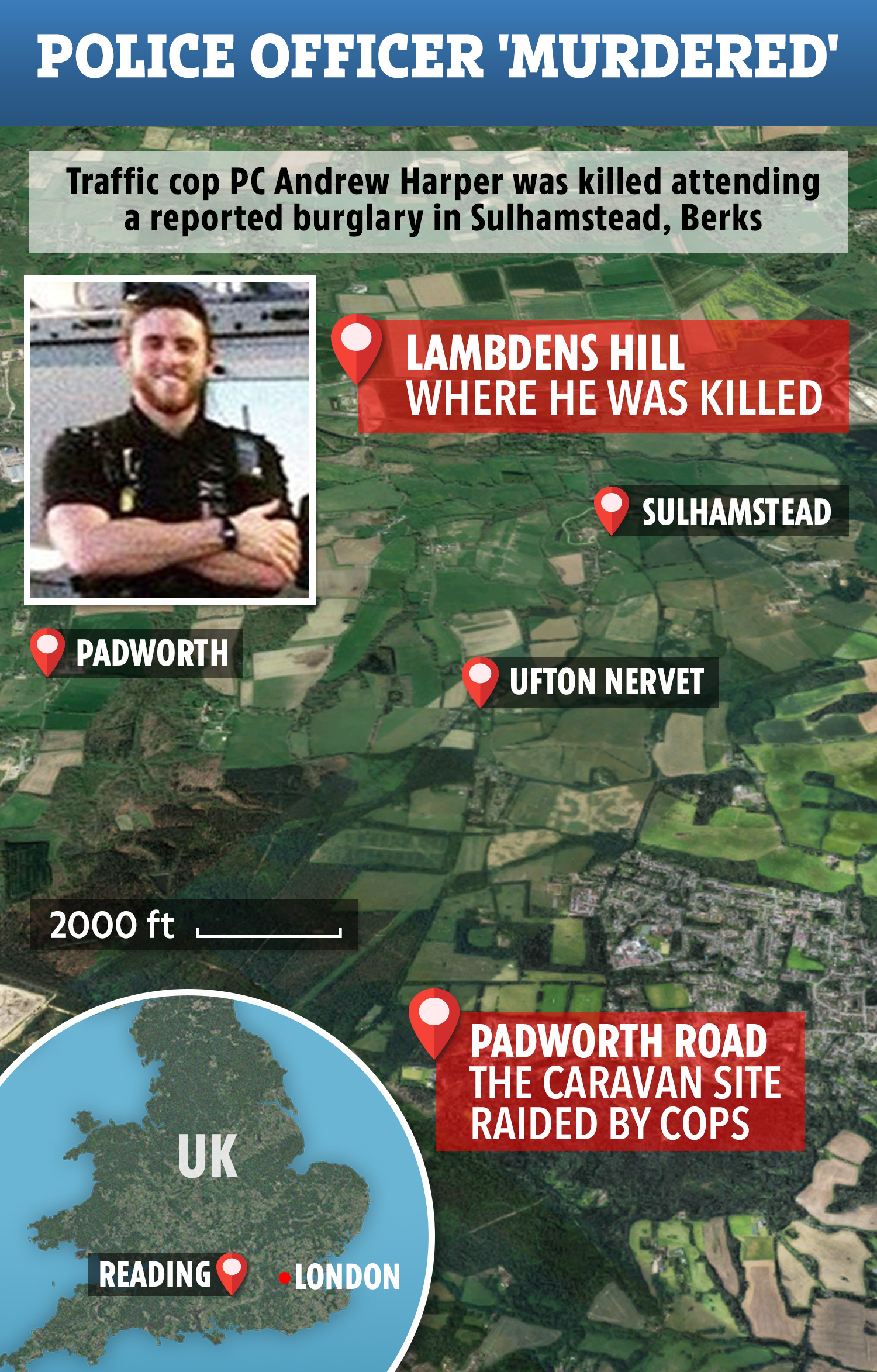 What happened to PC Harper?

PC Harper, a rapid response officer with the force’s roads and traffic command, attended a suspected burglary with a colleague in a marked car at 11.30pm on Thursday, August 15.

He had just left his vehicle when he was struck by a car at a country crossroads, close to Sulhamstead and the A4 Bath Road between Reading and Newbury.

He fell beneath the vehicle and was allegedly dragged a “considerable” distance.

The Times reported he was thrown clear of the undercarriage of the vehicle only to be struck by a police car responding to the incident – believed to be a dog unit involved in the pursuit. 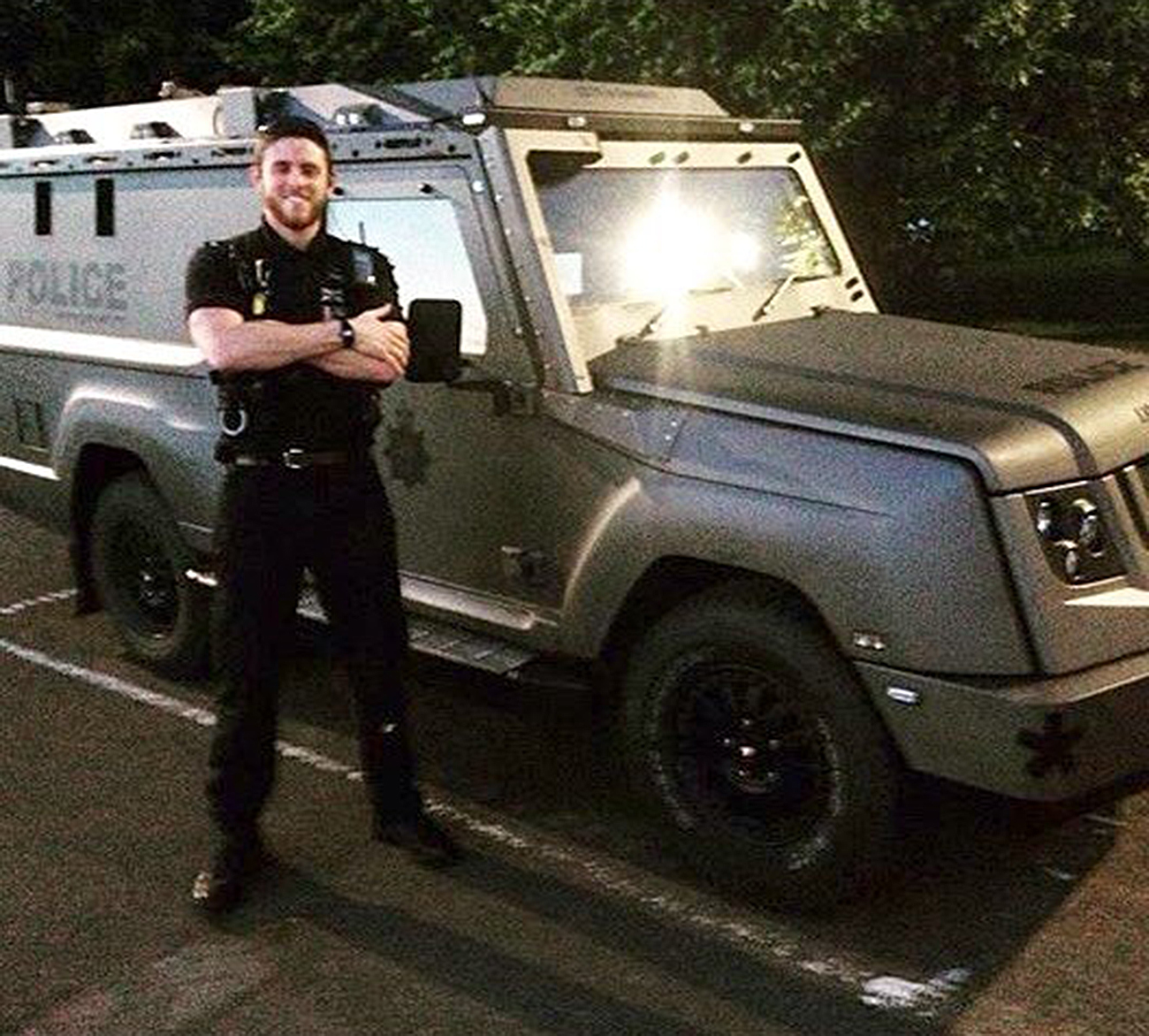 On August 17, police said that Harper died of "multiple injuries".

It is not yet clear at which stage PC Harper died.

Det Supt Ailsa Kent said: "A post-mortem was carried out on Andrew's body and the cause of death has been recorded as multiple injuries.

"(That) is consistent with our current belief that Andrew was caught between a vehicle and the road and then dragged for a distance." 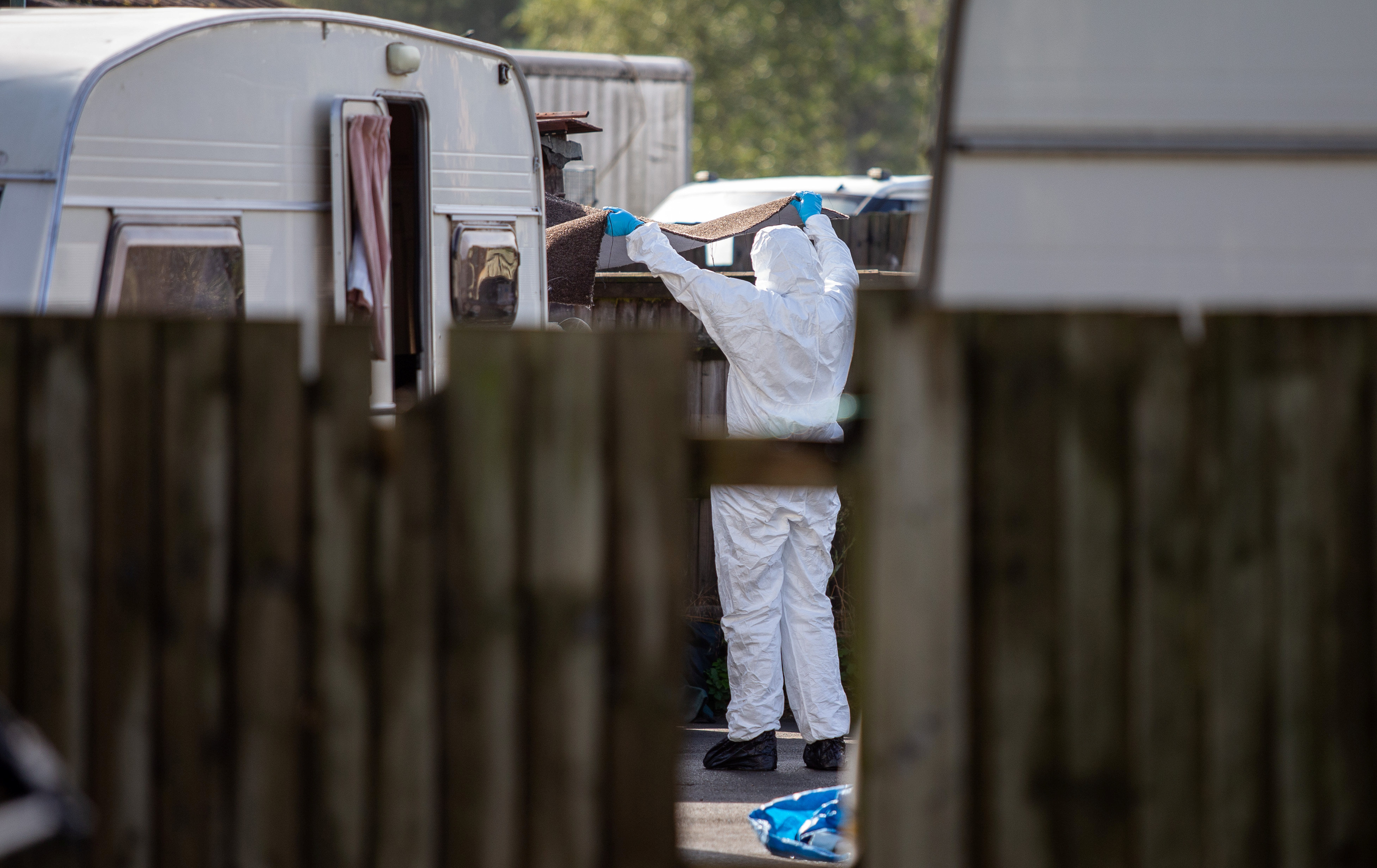 Police were given a 36 hour extension to their custody to carry out interviews.

On August 19, Jed Foster, 20, was charged with the murder of the officer. 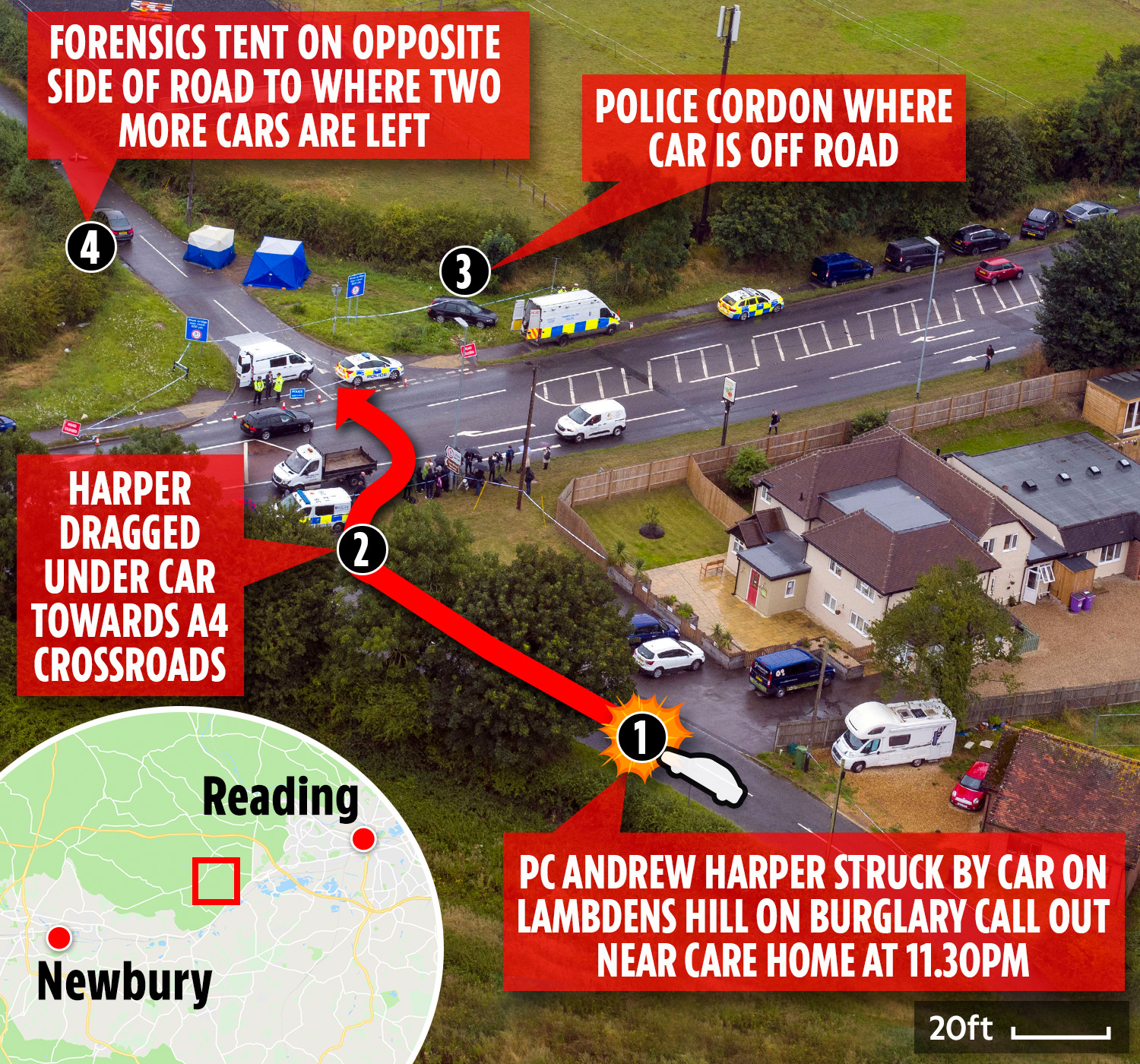 What has been said about this death?

PC Harper's heartbroken wife said: "My darling boy I do not know how I will be able to survive without you.

"Anyone who was lucky enough to meet you, whether they knew you as Andrew, Andy, Uncle Mann, Harps or PC Harper … to everyone you are a hero.

"You had the best sense of humour and never took life too seriously.

"You treasured every moment and always had a smile on your face."

Grieving Lissie praised her husband who "wanted to keep everyone safe" and "went the extra mile".

She said: "The lights have dimmed on all of our lives now that you are no longer here, but it's no surprise that even when you're gone, you're still keeping us all going, knowing that you would tell us to carry on and stay strong.

"You kept me going if I was down and took care of us all until the last."

He said: "The murder of PC Andrew Harper is a mindless and a brutal crime, obviously all our thoughts are with his family, friends and colleague."

Labour leader Jeremy Corbyn said he was “totally shocked” by the death.

"My thoughts are with his loved ones, colleagues and the community he served with great pride at this immensely difficult time.

“PC Harper died in the line of duty protecting the public and his incredible bravery and extraordinary sacrifice will not be forgotten.” 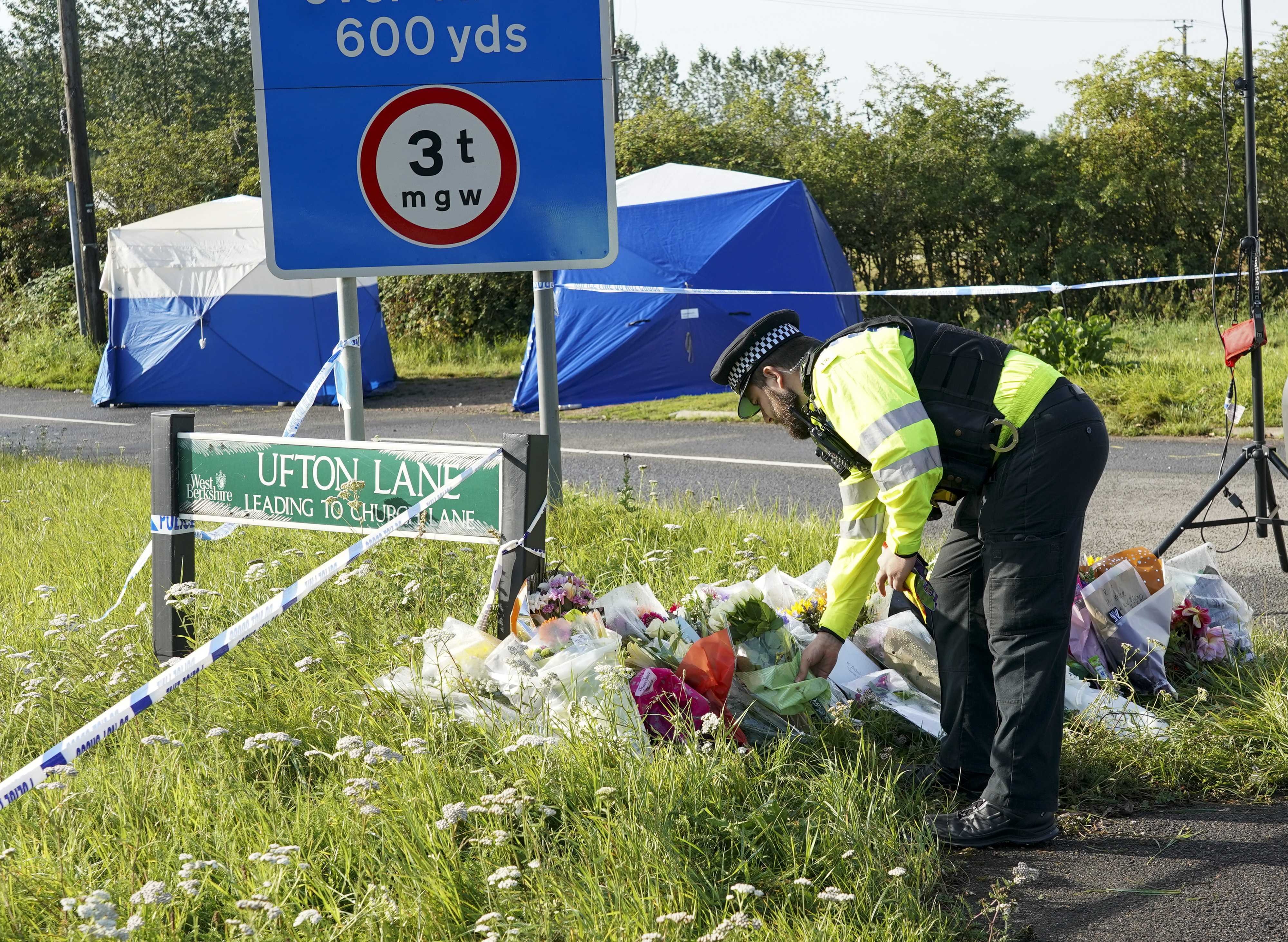 His mum left a message tied to a bouquet at the scene of his death: "We will never recover – our darling Andrew. You will never feel pain of growing old or a broken heart.

"I feel your presence comforting me in my darkest hours and minutes and know there’s enough to share with all those who love and need you right now.

His gran Maureen Shrimpton said: “Our grandson Andrew was killed last night while doing his police work. So proud of him.

Andrew’s uncle Dale Shrimpton wrote on Facebook: “He’s my oldest nephew. My sister’s first born. Mum and dad’s first grandson . . . and was married two weeks ago at a dream wedding. We are devastated.

“He was the loveliest person that you will ever meet. I can’t begin to tell you how we feel.”

Victims of crime helped by Andrew also paid tribute to him.

A woman tweeted: “PC Harper was the officer in the case when my then husband was arrested for domestic violence in 2016.

"He was brilliant & gave me the courage to take steps to change my life. I can’t thank him enough. He was a top officer.”

What is the JustGiving page and how much has been raised?

Donations for PC Harper hit £100,000 in just one day as his colleagues hailed him a heroism.

Thames Valley Police Federation have raised over £311,00o for the killed officer's family through the JustGiving page.

Donations of more than £30,000 have also flooded a page set up by PC Harper, who had pledged to undertake an endurance race for a children's cancer charity.