Jakarta: For the last month, the world has watched as COVID-19 has taken hold in China and then travelled around the world.

Fifteen cases have been confirmed in Australia. Across Asia, Japan, South Korea, Thailand, Malaysia, Singapore, the Philippines, Vietnam and Hong Kong have all reported multiple cases. The virus, though thankfully not as deadly as SARS or MERS, is spreading.

So why are there no confirmed cases of the coronavirus in Indonesia? 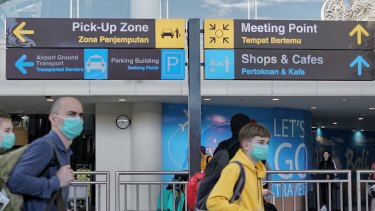 Tourist arrivals in Bali have taken a hit following a ban on Chinese visitors to Indonesia.Credit:Amilia Rosa

For a country with the world's fourth largest population, and which welcomed two million tourists from China last year (including 1.2 million to Bali) it's a claim that seems absurd.

At the time of writing, there was one suspected case in Maluki, though it has not been confirmed. For weeks the government has insisted there are zero cases.

The reality is that coronavirus is very likely already in Indonesia, but undetected. 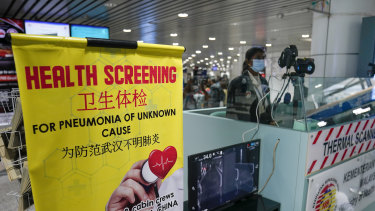 Professor Amin Soebandrio, the chairman of Jakarta's Eijkman Institute for Molecular Biology, has conceded the virus could be present. Curtin University infectious diseases expert Archie Clements said "it's entirely possible, you might even say likely, that there is undetected coronavirus there" while former Indonesian vice president Jusuf Kalla told the New York Times "it’s possible that there are infected people".

A paper released by five researchers at Harvard University last week suggested it was statistically unlikely there were zero cases in Indonesia, given the volume of air traffic between China and Indonesia. (Bali's airport received 6.2 million passengers last year, while Jakarta welcomed 2.4 million).

Health Minister Terawan Agus Putranto attacked the Harvard study as "insulting" butjust 77 people have been tested for the virus, with 75 confirmed negative cases and two still being processed.

Those figures pale in comparison to neighbouring countries that have populations three to 50 times smaller, all of which have conducted far more tests and have recorded infections.

Health department briefings emphasise the country has 100 hospitals on stand-by, 2000 test kits and a lab that can detect the virus, thermal scanners measuring body temperature at airports and health registration cards being handed out to airport arrivals.

They've even run a tour of the lab for journalists, to demonstrate that everything is just fine.

The question is not whether Indonesia's medical researchers can detect the virus. They can.

But just one lab, the Ministry's Research and Development Laboratory Litbang, is currently running tests to confirm positive cases of COVID-19. Offers of assistance from Eijkman and Airlangga University have been deferred because of the low number of cases.

If the labs aren't being given enough cases to test – perhaps because border screening measures aren't watertight, perhaps because people aren't self-reporting to doctors – then it's axiomatic that detection of infection is less likely.

Tourists have questioned the efficacy of border screening and some have reported being turned away from hospitals such as Sanglah in Bali when seeking help. 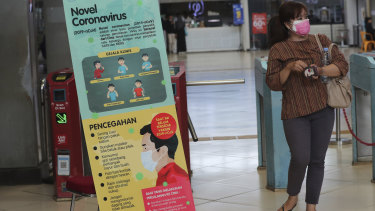 A woman wears a protective face mask as she passes an information banner on coronavirus at a train station in Jakarta, Indonesia. Credit:AP

When The Sydney Morning Herald and The Age revealed last month Indonesia did not yet have the specific test kits that can rapidly detect this new strain of coronavirus in a matter of hours the Health Ministry denied it, (though the WHO later confirmed it).

Health department officials insisted they had had the kits since late December – even though the details of the chemicals required were only publicly released on January 14.

Health Minister Terawan criticised the story and said Indonesia was not poor and could afford test kits.

At best, the officials were saving face.

Perhaps they meant they had the pan-coronavirus test, which tests for all strains of the virus including the common cold, COVID-19, SARS and MERS and which has been widely available for years? That test must be followed by gene sequencing after an initial positive to confirm novel coronavirus-19.

The specific COVID-19 test kits are now in Indonesia but still there are zero infections reported.

Ordinary Indonesians have twigged to this. The price of face masks has spiked. Some brands of hand sanitiser are getting harder to find at online retailers. Rumours and doubts about the zero infection claim ripple through social media and are denied by the government.

Achmad Yurianto, the Health Ministry's secretary-general for disease control, said on Thursday that lab tests were "not the first intervention". 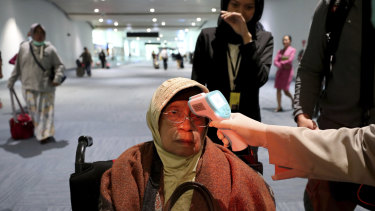 A health official scans the body temperature of a passenger as she arrives at the Soekarno-Hatta International Airport in Tangerang, Indonesia.Credit:AP

Body temperature checks (which prove nothing if the patient is carrying the infection but isn't sick yet), travel history checks and close contact with people who have been infected all happen first.

But at a seminar at Eijkman on Wednesday institute researcher Professor David Handojo Muljono supported more, and wider, testing of potential cases.

"We have proposed this, we have communicated with our colleagues".

As fellow researcher Dr Herawati Sudoyo put it "I don’t think one institution can do the screening for all of Indonesia".

"It’s not that we would like to get a positive, [but] we don’t want to be in a position where we aren’t really sure [of] the conditions in our country."

As the virus spreads in the countries that surround Indonesia, officials seem more concerned with controlling the message than rooting out possible infections to obtain the true picture on the ground.