Colorado: Hundreds of years before John Wayne and Gary Cooper gave us a Hollywood version of the American West, with men as the brute, weather-beaten stewards of the land, female ranchers roamed the frontier. They were the indigenous, Navajo, Cheyenne and other tribes, and Spanish-Mexican rancheras, who tended and tamed vast fields, traversed rugged landscapes with their dogs, hunted and raised livestock.

The descendants of European settlers brought with them ideas about the roles of men and women, and for decades, family farms and ranches were handed down to men. Now, as mechanisation and technology transform the ranching industry, making the job of cowboy less about physical strength — though female ranchers have that in spades — and more about business, animal husbandry and the environment, women have reclaimed their connection to the land. 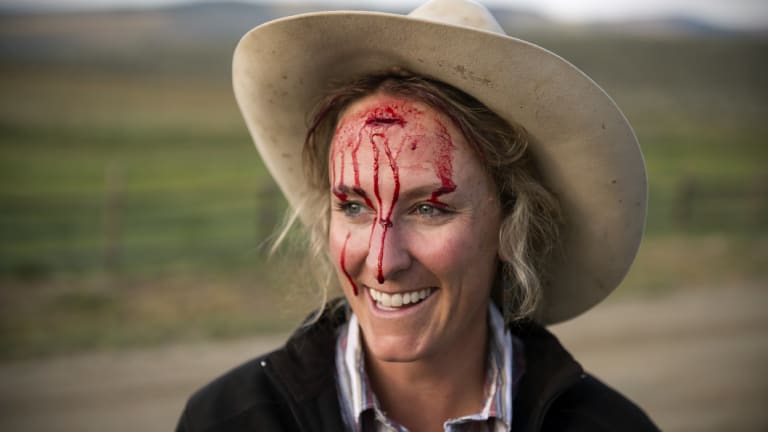 Caitlyn Taussig after a cow kicked a gate, splitting open her forehead, on the family ranch in Kremmling, Colorado. She helps run the ranch with a cadre of cowgirls, including her mother and sister. Credit:New York Times

At the same time, the brothers, sons and grandsons who would have historically inherited a family ranch have, in the last decade, opted to pursue less gritty work. As a result, in 2012, 14 per cent of the nation’s 2.1 million farms had a female proprietor, according to the US Department of Agriculture. That ratio may rise, as over half the farms and ranches in the United States are expected to change hands over the next 20 years. 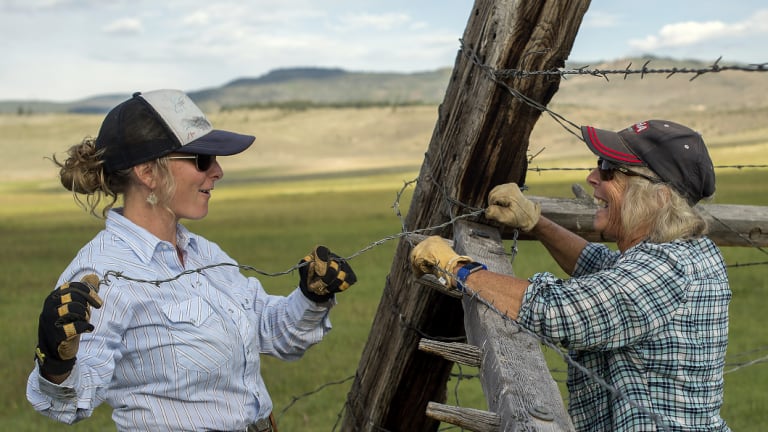 Caitlyn Taussig and her mother, Vicki, mend fences on their ranch in Kremmling.Credit:New York Times

Growing up on her family’s ranch in Kremmling, Colorado, Caitlyn Taussig watched her mother do all the cooking and housework even as she helped tend to the cattle and horses. Today, Taussig, 32, helps run the ranch with a cadre of cowgirls, including her mother and sister. They only really rely on men on the days when they have to brand the Angus Cross cattle.

“We just sort of treat each other differently,” Taussig said shortly after a cow kicked a gate that split open her forehead. She got six stitches and was back at work that afternoon. “There’s less ego.”

Against the vast blue skies and craggy prairies, female ranchers have found the same independence and adventure that first lured their male antecedents, but they are also forging a new path. Women are leading the trend of sustainable ranching and raising grass-fed breeds of cattle in humane, ecological ways. 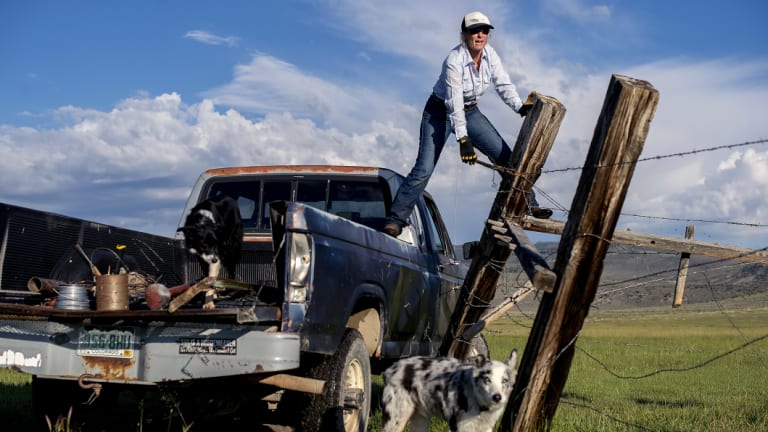 Caitlyn Taussig says there is ‘less ego’ around when women are running the family farm.Credit:New York Times

On the west bank of the Missouri River in north-central South Dakota, Kelsey Ducheneaux, 25, raises sustainable beef on the land that generations of the Lakota Nation have worked.

“We believe that we can only be as sovereign as a nation as we are in our food systems,” she said.

For Native Americans, the concept of women working the family ranch is not revolutionary, but a return to the natural order. Ducheneaux attended South Dakota State University and had planned to work on the 7500 acres (3120 ha) of tribally leased land that she had grown up on, but it was not until her grandmother died that she understood the importance of the role of women on the ranch.

“She was the actual rock of the family,” she said. “That’s how Lakota families are. We are a matriarchal society, always have been.”

Beth Robinette, 31, is the fourth-generation owner and operator of the Lazy R Ranch in Cheney, Washington. She runs New Cowgirl Camp, a five-day course that trains women in animal husbandry, ranch management, financial planning, ecological monitoring and regenerative grazing. Robinette recoils at the gaudy, country-pop version of the overly feminised cowgirl and calls her program a “rhinestone-free zone”. 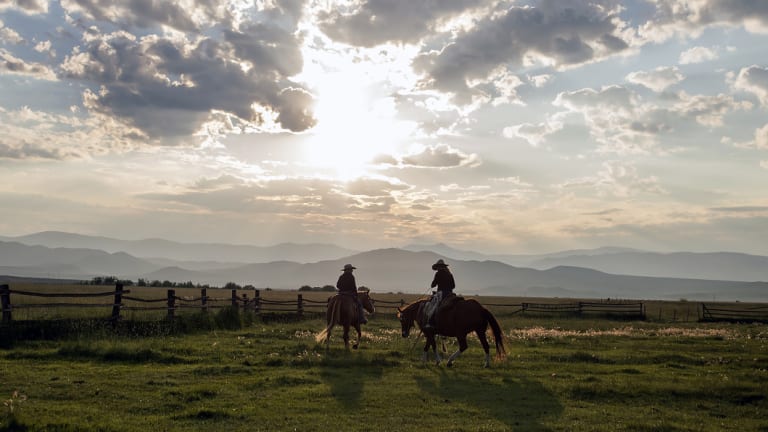 Caitlyn Taussig and her mother, Vicki, set out on horseback to check cattle on the family farm in Kremmling.Credit:New York Times

“Our current generation of land managers is aging out of that role,” she said. “You could look at that as a disaster, or you could really look at that as an opportunity to change the paradigm.”

Cory Carman, 39, thought she would spend just a summer working on her family’s ranch in Wallowa, Oregon, but she has parlayed her parents’ prairie into a leading local provider of grass-fed beef.

“I had a certain period of feeling a little bit angry about the challenges of not being taken seriously,” said Carman, a Stanford graduate. “The number of times that I’ve walked into a meeting and people are like, ‘You don’t look like a rancher'.”

But the same judgment also proved liberating, as female ranchers like Carman redefined the job. 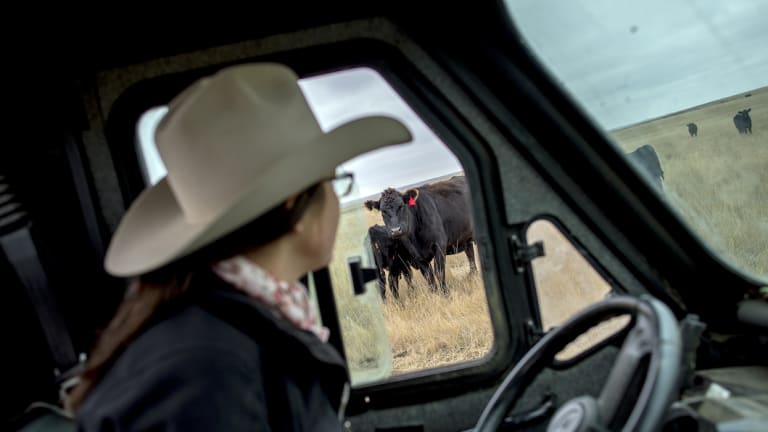 Kelsey Ducheneaux, a member of the Lakota Nation, checks on cattle on the Cheyenne River Indian Reservation, in South Dakota.Credit:New York Times

This reimagining of a role that has for so long loomed large — and male — in the American imagination has not come without conflict.

When Amy Eller, 33, first took on a major role on her family’s ranch after her brother had less interest, she clashed with her father about how to treat the livestock.

“He’s like, ‘Oh, you’re wasting your time putting that hay in there’. And I’m thinking, it calms them down,” she said of a recent conversation with her father.

Today, three generations of Eller women work on the ranch. When her young daughter, Wendy, was a baby, Eller would strap a car seat into a tractor and take her to feed the cows. 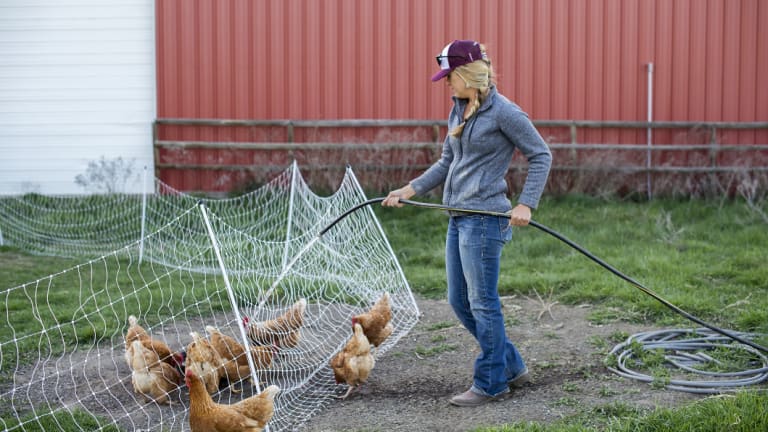 Barb Bartlett, a Stanford graduate, does chores at 6 Ranch in Enterprise, Oregon, after a day of work at Carman Ranch in nearby Wallowa.Credit:New York Times

Maybe it is because women can finally feel the freedom of the American West in a way men have long romanticised, but Eller said there was just something different, spiritual even, about women working the land together.

“If the tractor breaks down, I’m like, ‘Oh, I’m thankful my dad is here’. But when it comes to everyday work, like feeding the cows, I would much rather go with my mom, because we can actually enjoy it,” she said. “We’ll both say, ‘Oh, isn’t this beautiful out here today?’ We notice how beautiful it is when the sun’s shining on the snow.”