When Boris Johnson deployed his secretive envoys to Balmoral castle to ask the Queen for an early suspension of Parliament this week, the national mood was already febrile. Once the news emerged, however, it was Fleet Street’s red-top tabloids that best encapsulated the societal chasm created by Brexit as the October 31 deadline hurtles ever closer. 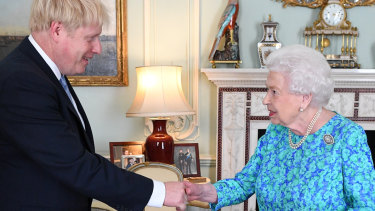 A royal dilemma … Queen Elizabeth had little choice but to agree to prorogue Parliament, just over a month after she invited Boris Johnson, as the new leader of the Conservative Party, to become Prime Minister on July 24.Credit:AP

"PROROGUE" thundered its Remainer nemesis, The Mirror, in a 230-point splash headline (the ROGUE embellished in red type).  It helpfully added a kicker – “PM branded a tinpot dictator for suspending Parliament” – for anyone who didn't quite get the message.

Brexit has polarised Britain since the referendum on European Union membership yielded its shock result on June 23, 2016. But nothing has unleashed quite the level of outrage seen over the past 72 hours as water cooler talk – from pubs and offices to schools and its most elite universities – turned to matters of the constitution and whether the monarch, in fact, had any choice in the matter.

Johnson’s request, that Parliament close for five weeks from the second week of September until October 14, is reported to be the longest suspension since 1945. It leaves less than a fortnight for crucial debate before the midnight-on-Halloween "Leave the EU with no deal" deadline.

Not surprisingly, the Conservative Speaker of the House of Commons, John Bercow, echoed the thoughts of many when he furiously dismissed the suspension as a “constitutional outrage”, describing it as a “blindingly obvious” plan to stop Parliament debating Brexit.

To be fair, the never-ending Theresa May/Brexit debacle has meant that this last session has been extraordinarily long. And governments, even under fresh leader like Johnson who is yet to be be elected by the people, have a strategic right to pull up stumps and come back to announce their new legislative agenda. This is traditionally heralded by all the pomp that comes with the Queen’s speech and opening of a new Parliament.

Within hours, however, the Conservatives’ trumpeted list of new priorities (“helping the NHS, fighting violent crime, lowering the cost of living”) was subsumed by the wildly trending Twitter hashtag #StopTheCoup, footage of spontaneous protests outside Number 10 Downing Street, an anti-prorogue petition of 1.6 million signatories, and growing, and plans for street protests on Saturday in London and other major cities.

To date, the Queen has deftly managed to avoid being dragged into the Leave or Remain quagmire. This is despite never-ending attempts by pundits to analyse her words and even body language, most memorably during the opening of Parliament in June 2017 when she wore a bright blue coat and hat with a coronet of yellow daisies joyfully reminiscent of the European Union’s flag.

The veteran BBC royal correspondent, Nicholas Witchell, is adamant the Queen’s assent to Johnson’s request should not be read as a sign of her personal beliefs as she has never, in her 67-year reign, refused to accept the advice of her ministers. “She is a monarch guided by precedent” Witchell said.

A.V Dicey, the British legal theorist still quoted today by modern Constitutional experts, wrote in his seminal 1883 book Introduction to the Study of the Law of the Constitution that Britain’s politicians and institutions are governed by two parallel sets of rules: the first are laws (usually written) and enforced by the courts; the others are "conventions", best described as understandings, practices, perhaps even habits that regulate sovereign and ministerial behaviour.

Before the 19th century, prerogative powers were exercised by the monarch acting on his or her own initiative. Since then, conventions have ruled that these powers only be exercised on the advice of the prime minister or cabinet, who are then accountable to Parliament for the decision.

According to Witchell, the Queen will not only have felt that she had no choice, but will probably “have felt pretty boxed in – that she had no option … She and her advisers, I have little doubt, will be frankly resentful of the way this has been done and will be concerned at the headlines which say, ‘Queen suspends Parliament’.”

Rowena Moffatt, a barrister with the internationally renowned Doughty Street Chambers in London and author of Brexit: The Immediate Legal Consequences, agrees. She observes that Johnson’s request placed the Queen between “a rock and a hard place”.

“It would have been undemocratic to have consented and undemocratic not to assent," Moffatt told me. "It is a very difficult existential position either way."

Professor Vernon Bogdanor, of Kings College London’s Centre for British Politics and Government and one of Britain’s foremost constitutional experts, noted that the last time a monarch dared to challenge the authority of a government was in 1834 when King William IV dismissed Lord Melbourne's Whig government: “Let’s face it, that didn’t end well.”

Bogdanor told me: “The crisis that unfolds when you don’t accept the advice of a prime minister is one you Australians are also unlikely to forget … remember what [Sir John] Kerr did in 1975? That didn’t end well either.”

It seems that for the Queen, 2019 is turning out to be another "annus horribilis" dominated by an unwinnable case of "damned if you do and damned if don’t".

Paola Totaro is a former Europe correspondent for The Sydney Morning Herald and The Age and now lives and works in London.