The MCG will now have its S.K. Warne stand, but when it comes to choosing a corner of Melbourne to honour him we are surely spoiled for choice.

What about a bathing box at Brighton Beach? A poker table at Crown? A cafe in Hampton? A bench at Fountain Gate, where Kath & Kim’s Sharon might pay homage?

This was Warne: the Melbourne boy made good, and the boy who made good but stayed. He went away often, of course, and for long stretches at a time, but he never left his hometown forever, until yesterday.

Melbourne will miss him, and how could we not? His life was here, along with his lasting sporting passion — footy, and his beloved Saints. And his kids, his mum and dad, his former wife, his many mates.

Has an Australian sports figure loomed larger in the national imagination? Not many, and in the last 30 years he shares pride of place in our sporting dreams with Cathy Freeman and Ian Thorpe as an icon who transcended his field of achievement.

But in Melbourne, he wasn’t just a legend of the imagination. He was a man on the street, on the beach, at the casino, in the pizza joint, at the servo. 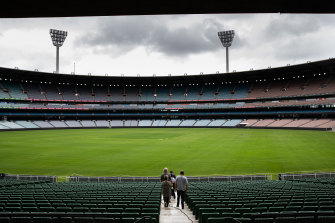 The Great Southern Stand at the MCG will be renamed in honour of Shane Warne. But there are many other places in Melbourne that could also serve as tributes. Credit:Jason South

Social media is awash with Melbourne memories of Warne, and bursting with lovely selfies of people, famous and not, posing with him.

There were two reasons for that, as broadcaster Justin Smith noted on Twitter: “People wanted to be near him. [And] he would say ‘yes’ to every single person.”

Our memories were charming and sometimes mundane, in keeping with a man whose appetites — for baked beans, for cigarettes, for beer — were often of a man-in-the-street variety.

“Met him once at Hampton 7-Eleven, really friendly guy. Signed my Women’s Weekly,” remembered one local. 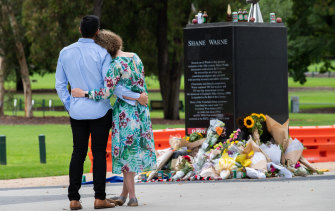 And another: “At the next table to him at a modest pizza restaurant in Hampton. All he had was pizza, a beer and his three kids. Quintessential family time. Watching him that night enjoying his family was a pleasure.”

At a buffet at Southbank, where he was a fixture at Crown’s poker competitions: “He was filling up plate after plate of prawns. Nothing but prawns.”

And this, from ABC producer Katrina Palmer: “With Coldplay’s Chris Martin, picking up a Xmas tree from bayside roadside stall a few years ago. Casual as you like. No getting it delivered for Warnie.”

That is how we thought of him. Just Warnie. One Melburnian revealed yesterday that she had a neighbour whose parents had named their son Warne — an odd first name to be sure, but we can be certain he, too, goes through life as Warnie.

Another famous Melbourne export and part-time Londoner, Dannii Minogue, remembered him not as Warnie, and not as a fellow celebrity, but as a man who was endlessly kind to her family. 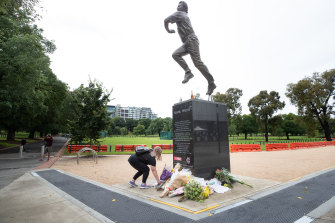 The Shane Warne statue at the MCG. Credit:Jason South

“He knew that I didn’t have a clue about cricket, but he liked that. To me, he was just Shane. I can still hear him say, ‘Hey Disco how are you’?”

This was the confounding thing about him. He was a world-famous celebrity, a man of immortal sporting achievement. But he was also just Shane from Melbourne, born in Upper Ferntree Gully, raised in Black Rock.

In a 2007 interview with Michael Parkinson, he was asked: “Did you want to be famous when you were a young kid?”

“I never thought about being famous, no,” Warne replied. “It was good fun for about 10 days or maybe a couple of months, but it wore off pretty quick.”

But fame was his fate, and it’s hard to believe he didn’t secretly love the attention some of the time.

In Melbourne, we might think back to February 2011, when Warne brought Liz Hurley home to meet the family.

The couple’s tabloid moniker was a work in progress — Shurley? Wurley? Shiz? — when they holed up at Warne’s Brighton mansion with the media camped outside.

Late on a Saturday, they finally emerged, dressed to the nines, Warne behind the wheel of his black Mercedes. In the media scrum, he accidentally knocked over a paparazzo, and the moment was pure Warne: the Melbourne boy made good, showing off his lovely lady — and never far from a scrap with the press.

Hometown fans flocked to his statue at the MCG on Saturday. He’ll stand there forever now, forever young. Our city mourns, and the same feels true today as it did when we lost Bert Newton a few months ago: Melbourne will be a little less Melbourne without him.