A former Special Air Service soldier who testified for war veteran Ben Roberts-Smith at his defamation suit has been arrested and charged with harming and resisting a Commonwealth official following his turn in the witness box.

The ex-soldier, who was given the pseudonym Person X for the purposes of his criminal proceedings, was approached by detectives attached to the Office of the Special Investigator enquiring into allegations of war crimes hours after he finished giving evidence on Tuesday afternoon. 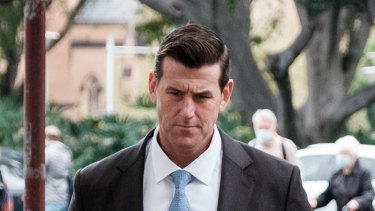 Ben Roberts-Smith arriving at Queens Square for his defamation case on Tuesday.Credit:Oscar Colman

He has been charged with obstruct/hinder/intimidate/resist a Commonwealth official and causing harm to a judicial/law officer. Appearing via video link at Central Local Court on Wednesday afternoon, the man was granted bail. He will be permitted to return to his home overseas until he is next required in court.

Person X spent three days giving evidence for Roberts-Smith, who is suing The Age, The Sydney Morning Herald and The Canberra Times over articles that he claims portray him as a war criminal and murderer.

Person X was with Roberts-Smith during a 2009 mission at a village compound designated Whisky 108 when the newspapers allege that two Afghan men were pulled from a tunnel and killed by SAS troops, contrary to the rules of engagement that prohibit the killing of unarmed prisoners.

Roberts-Smith is alleged to have directed a junior soldier, Person 4, to execute one of the men, on the orders of Person X, and to have shot the other one himself.

Person X agreed under cross-examination that a total of five murder allegations have been made against the patrol he commanded with Roberts-Smith as his second-in-command, though only the two incidents at Whisky 108 form part of the newspapers’ defence. The other three are alleged to have occurred a year later at a compound known as Whiskey 591.

He told the court that in 2018 he had been interviewed by the head of a Defence Force inquiry into allegations of war crimes and agreed there was a chance he would be prosecuted, but not over the events at Whisky 108.

The prosecution did not oppose bail and his matter will return to the Downing Centre Local Court on June 21.