Travellers arrived at Luton Airport today for the first time since Britain went into lockdown as the budget carrier Wizz Air resumed some flights – with strict new rules for cabin crew and passengers.

Low-cost Hungarian airline Wizz Air is one of the first European airlines to restart routes during the coronavirus pandemic.

The airline carrier introduced new hygiene measures, such as passengers and crew wearing face masks and removing inflight magazines, to combat the spread of the virus. 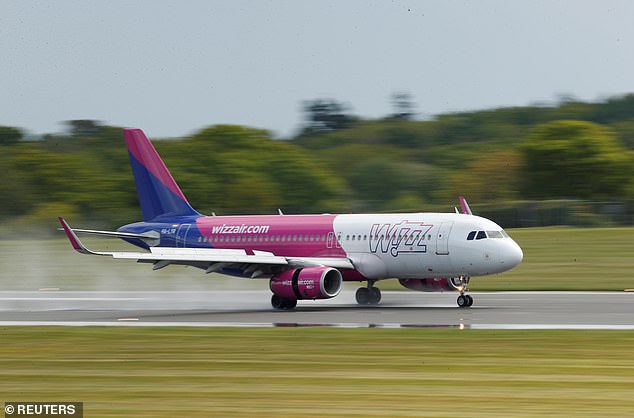 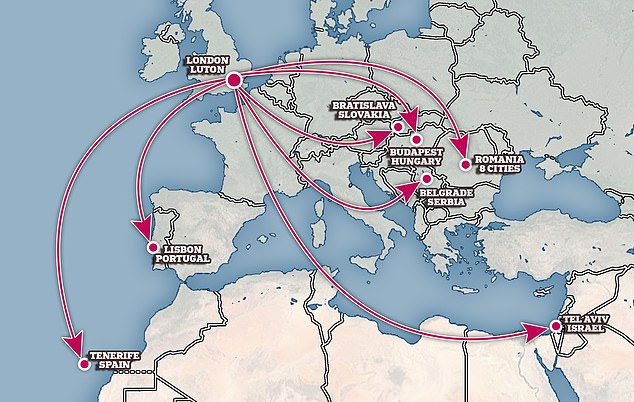 The airline resumed services to Budapest, Lisbon and Sofia today and plans to restart flights to Slovakia, Serbia, and Israel in the coming weeks 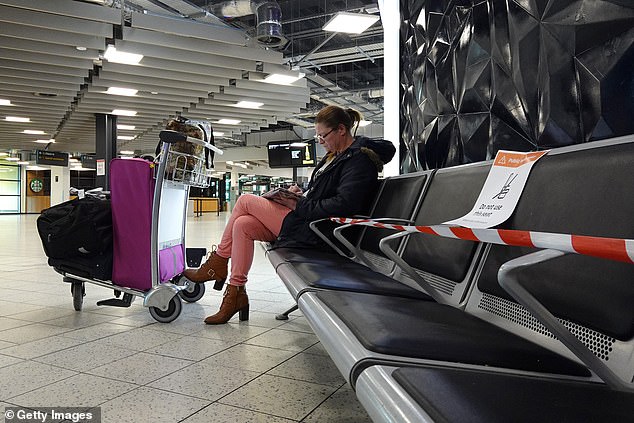 It reopened its base at the nearly empty Bedfordshire airport this morning, starting with flights to Budapest, Lisbon and Sofia, and plans to restart flight to Tenerife and Tel aviv in the coming weeks, pending travel restrictions.

The group aimed to make flying affordable for everyone and after three months of planning Wizz Air was a registered company ready to fly.

Less than a year later, in May 2004, the first Wizz Air flight took off from Katowice, Poland, to London Luton Airport, 19 days after Hungary and Poland joined the European Union.

In the first year more than 1.4 million customers flew with the airline with that figure rising to five million within in two years.

In its fourth year of business it had flown ten million passengers to various destinations.

Today the airline has 120 Airbus A320s in its fleet which fly to 154 airports and across 710 different routes.

The UK’s arm of Wizz Air opened at London Luton Airport in 2017 and is run by managing director Owain Jones.

In 2019 the company were named the greenest airline in Europe, with the smallest environmental footprint per passenger, and in early 2020 it was hailed as the best low-cost airline by Airlineratings.

At least one person onboard the flight which landed at the UK airport from Sofia this morning could be seen through the window wearing a face mask and there were also dozens of passengers within the airport.

Wizz Air introduced other hygiene measures which require passengers to space out for social distancing during boarding and implemented an enhanced cleaning regime.

Customers are also being urged to use online services for checking in and making purchases such as additional bags to ‘reduce non-essential interaction at the airport’.

Contactless payment methods are also being encouraged if passengers buy anything while on flights.

UK coronavirus lockdown restrictions prevent Britons from being allowed to travel to Luton airport for a holiday but people are able to fly for other reasons such as to return home after being stranded overseas or if they are travelling for work.

Despite the guidance, the London Luton arrivals and departures board showed three Wizz Air flights were due to arrive and depart today.

The airline said it is important to get the infrastructure operating and that there are people across Europe who need to travel for work.

It also added that it does not expect flights to be full which will enable passengers and crew it to maintain social distancing onboard.

Mid-morning the Mangusher family turned up to catch a flight to Sofia in their native Bulgaria to visit grandparents and catch up with other family members.

The family of four who live in the UK admitted they were excited at the prospect of visiting their family for a short break. 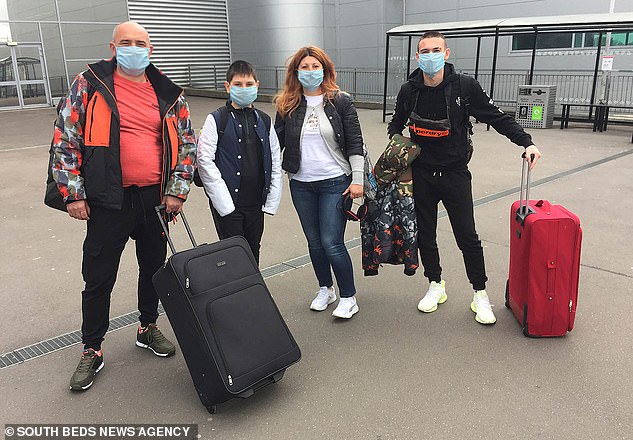 The Mangusher family, Dad Gergi (left), his wife Nina and their sons Kristian, 18 (right), and Stivan, 11, (second on the left), boarded the flight to visit their family in Bulgaria

Dad Gergi, his wife Nina and their sons Kristian, 18, and Stivan, 11, were all wearing face masks for the 1.35 pm flight.

Businessman Slavey Slavchev also arrived at the airport for the flight because he needed to sign important business papers but said that would only happen after he had spent a period in quarantine.

He said: ‘I have a number of farms both here in the UK and back home in Bulgaria and not being able to fly over the last few weeks has been a problem.’

Travellers making their way out of the terminal at Luton said the plane hadn’t been full so were able to sit with plenty of space between themselves and their fellow flyers.

Some of those arriving said they had come to the UK for the summer and had jobs picking fruit and vegetables of farms.

Sylvia Gaorgieva said she was making her way from the airport to a farm in Kent where she would be working as a picker.

At the airport the carparks and normally bustling walkways were empty as across Europe air traffic is reported to be down by about 90 per cent according to global body IATA. 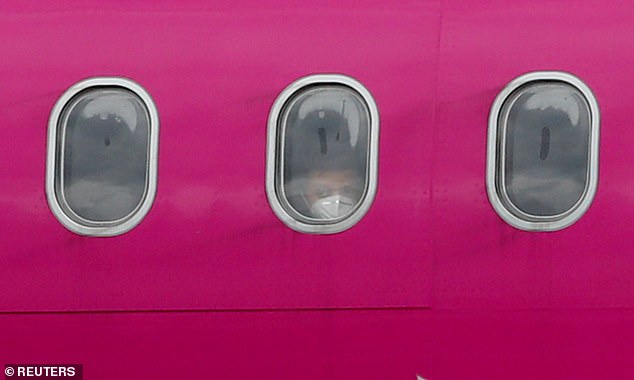 But a spokeswoman for Wizz Air said the load factor on the flights today were on average well above 50 per cent and was as high as 80 per cent on some flights.

Today’s flights were some of the first commercial journeys to leave the UK with most of airlines only operating to help citizens return to their home country, to facilitate travel for medical experts and transport vital supplies including medical equipment.

Wizz Air’s UK managing director Owain Jones said: ‘As we restart selected Luton flights to provide an essential service to passengers who need to travel, our primary concern is the health, safety and well-being of our customers and crew.

‘The protective measures that we are implementing will ensure the most sanitary conditions possible.

‘We encourage our customers to watch our new video on how to stay safe when travelling, as well as for more details on our new health and safety measures.’

Mr Varadi told the Financial Times: ‘While today looks like a huge concern, a life changing moment, in a year or two nobody remembers.’

He said: ‘Whatever crisis we look back on in history, one conclusion you can certainly make is peoples’ memories tend to be very short. While today looks like a huge concern, a life changing moment, in a year or two nobody remembers.’

A statement issued by the airport today said ‘Today Wizz Air resumed three routes from London Luton Airport, all of which are subject to travel restrictions imposed by their local governments. In the case of both Hungary and Bulgaria, only citizens of those countries are permitted entry. 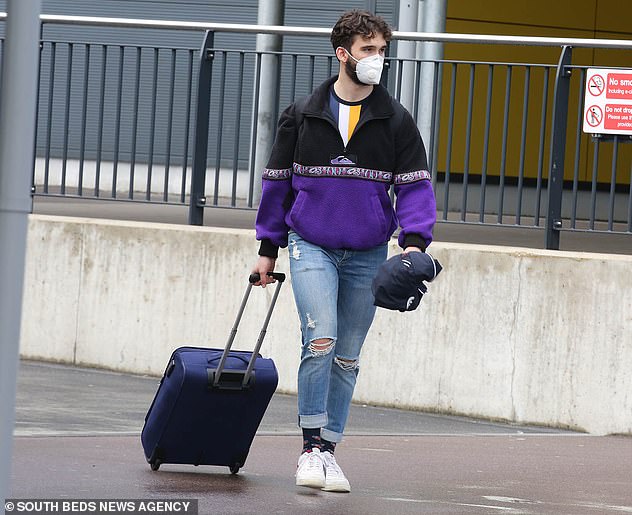 ‘The safety of our passengers and staff is our top priority and we continue to rigorously implement all Government guidance. This includes deep cleaning, the installation of sanitiser across the airport and floor markings and signage to remind customers to maintain a safe distance. We are also displaying the latest public health guidance throughout the terminal.

‘Air links for both passengers and freight have been recognised as essential services and the Government has asked airports to remain open where possible to ensure they can continue. The decision to operate individual routes is a matter for each airline. As well as adhering to travel restrictions in the country of travel passengers also need to follow those imposed in the UK.’

Despite research by Bank of America showing Wizz Air has a substantial cash reserve which could pay the customer refunds three times over, the company has said it won’t be issuing any.

Passengers won’t be able to cancel their flight even if the country they are due to be flying to won’t let them in.

Those who have their flight cancelled will get 120 per cent off the price of the flight in the form of vouchers which can be used in the next two years.

The budget airlines decision to resume flights comes after it was announced British Airways plans to cut the jobs of a quarter of its pilots and abandon Gatwick Airport in a bid to survive disruptions caused by coronavirus.

The memo written by the head of BA’s Gatwick operation and seen by BBC News notes the airline may have to stop the few services still running at London Heathrow.