Washington: About two months after thieves violently accosted pop star Lady Gaga’s dog walker, shooting him and stealing her French bulldogs, five people were arrested in connection with the incident, including the person who returned the dogs. 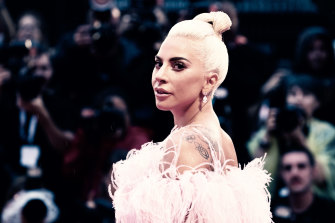 Lady Gaga has offered a $US500,000 reward for the return of her two dogs.Credit:Getty Images

Jackson, who authorities allege shot the gun, will also face one count each of assault with a semiautomatic firearm and a felony of carrying a concealed firearm in a vehicle, according to District Attorney George Gascon. White faces an additional assault charge.

“This was a brazen street crime that left a man seriously wounded,” Gascon said in a statement.

Detectives said Jennifer McBride, 50, who returned the dogs two days after the attack, claiming that she had found them, had a relationship with the father of one of the suspects, Harold White, 40. The two were charged with accessory to the shooting.

The four men are documented gang members, according to police.

It was not immediately clear if the five had lawyers. 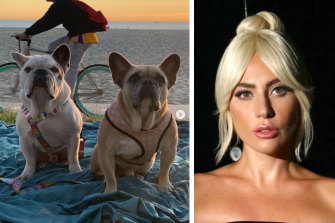 Lady Gaga, whose real name is Stefani Germanotta, had offered a $US500,000 ($642,000) reward and a contact email address, for the dogs’ safe return. At the time of the crime, Lady Gaga was reportedly working on a film in Italy.

McBride reached out via the email address to return the dogs, Koji and Gustav, police said.

A third dog, Asia, escaped the abductors’ clutches, lying next to dog walker, Ryan Fischer, as he bled on the sidewalk, he recalled.

“I cradled Asia as best I could, thanked her for all the incredible adventures we’d been on together, apologised that I couldn’t defend her brothers, and then resolved that I would still try to save them and myself,” Fischer wrote on Instagram while he was recovering from “a very close call with death.”

On February 24, Fischer was walking at about 9.40pm on Sierra Bonita Avenue in Hollywood when a white car approached him and men stepped out, according to a surveillance video of the startling scene. As the men struggled with Fisher, he screamed “no, no, no.” Seconds later, one of the men shot him, and Fischer fell back and howled as the car sped off.

With their squat bodies and friendly demeanour, French bulldogs, otherwise called Frenchies, are especially Instagram-worthy and in vogue among dog owners. In 2020, they were the second most popular dog breed in the US after Labrador retrievers, according to the American Kennel Club.

Given their lofty price tag — between $US1500 and $5000 or more — the small dogs have been targeted in recent years by criminals hoping to sell them to people interested in owning the “it” dog. 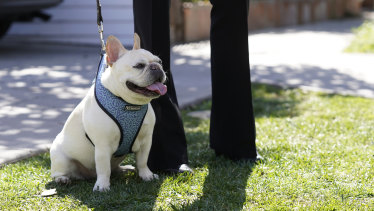 A French bulldog sits near an area on North Sierra Bonita Ave in Hollywood where Lady Gaga’s dog walker was shot and two of her French bulldogs stolen.Credit:AP

“Smaller breeds are more appealing for theft, and French bulldogs are wildly popular right now,” Brandi Hunter, vice-president of public relations and communications at the American Kennel Club, told CNN. “The demand for the breed is higher than the supply so they are often a more targeted breed.”