At boardroom tables in New York and in the cabinet room on Spring Street, Mary Wooldridge always offered to hold the pen during meetings.

Note-taking is often deemed a secretarial role, but Ms Wooldridge, the new director of the federal government’s Workplace Gender Equality Agency, found it an effective trick to make sure her voice was heard. 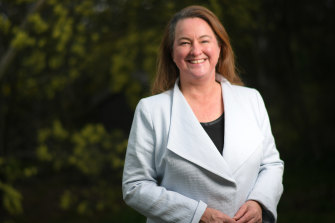 “If you are holding the pen, there is a huge amount of power that comes with that and, of course, all your ideas end up on the whiteboard, along with everyone else’s, of course,” Ms Wooldridge said.

“You become the person facilitating conversation, and you are the one taking the notes in terms of the record of the outcome of the meeting. I used that as a strength rather than a weakness.”

At 54, Ms Wooldridge has had an enviable career that has included taking leading roles in business, politics and more recently in charitable organisations.

After graduating from the University of Melbourne with a bachelor of commerce degree in 1989, she completed a master’s of business administration at Harvard Business School. From there she was recruited by McKinsey and Company, working in London and New York before being lured back to Australia to negotiate deals at Kerry Packer’s Publishing and Broadcasting Limited.

From her early days as a student at Methodist Ladies College, Ms Wooldridge had political ambitions. She eventually took a job working for Liberal industry minister Nick Minchin before running for the Victorian Parliament for the Liberal Party at the 2006 election, when her son was a one-year-old. She served from 2006 to 2020, rising to be a cabinet minister.

Reflecting on her career as she takes on a new challenge to narrow Australia’s gender pay gap, Ms Wooldridge said while she was never intimidated by working in predominantly male environments, she often felt she had to adopt some male attributes to be taken seriously.

"I guess I felt that I often had to be like them, rather than not, and it took me a long time to just be comfortable and come at things from a different perspective and add that separate value rather than trying to be just like the men were,” she said.

As director of the Workplace Gender Equality Agency, Ms Wooldridge will work with governments and businesses to reduce the gender pay gap and try to help workplaces prevent and respond to cases of sexual harassment. She comes to the role at a time when the nation’s pay gap has worsened. The latest data, released earlier this month, showed full-time female employees now earn 14.2 per cent less than men, which equates to a difference of $261.50 a week for full-time workers. 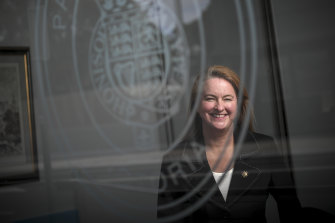 Mary Wooldridge spent 14 years as an MP in the Victorian Parliament.Credit:Eddie Jim

The data has Ms Wooldridge worried that the pandemic – which has already disproportionately hit young people, those in insecure work and women – could further widen the gap.

“The evidence shows that from 2004 through to 2014 the gender pay gap actually increased every year over that decade, and that included the global financial crisis,” she said.

“I am not foreshadowing that it’s a trend, but we have to be aware of it, we have to realise it is a risk in these times and that work has to continue.”

Ms Wooldridge concedes that closing the gender pay gap may be less of a priority for businesses struggling during the pandemic, but for others the extra time and industrial conditions provide the perfect opportunity to drive change.

“From a company perspective, it’s getting harder and harder to recruit talent. We have closed our borders, people aren’t mobile, so being high-impact in effectively valuing women and men equally is good for how they do business but also good for the way they attract talent,” she said.

"Being effective on gender equality can be part of the recovery.”

Ms Wooldridge insists that to close the gap, workplaces need to do more than provide equal pay to employees performing work of equal or comparable value, which is a legal requirement in Australia. She said it requires cultural change and removing “in-built biases”, which can act as workplace barriers to the equal participation of women.

Ms Wooldridge, who has called on the Liberal Party to consider introducing gender quotas, believes it is up to businesses and parliaments to remove in-built biases that limit women from being promoted, taking career breaks and progressing their careers.

She recently met with a manufacturing company that had struggled to attract female recruits for an entry-level position. The job description called for a forklift driver’s licence, which they discovered few women hold.

With no women applicants, the company realised it was a skill that could easily be taught on the job, so the requirement was removed from the advertisement. The following year, 40 per cent of applicants were women, rising to 50 per cent the year after.

“None of this change happens without leadership from the top and that permeates down through the organisation,” she said. “I don’t think it’s a women’s or men’s problem, I think it’s a problem for everyone to look at the limitations and barriers and set about removing them.

“It’s incumbent on people at the top of whatever structure it is, in business, parliament, or media organisations, to create that space and opportunity for women, and that drives a culture change.”

While she in encouraged by a new generation calling for change, Ms Wooldridge acknowledges that for many women, limits on what they think they can achieve are imbedded early in their lives, whether at home or at school.

“I feel I was very fortunate to have strong female role models and male supporters in my family,” she said. “Part of it is having families that create that notion of seeking something out and going for it and not being limited.”

Among those male supporters were older brother Michael Wooldridge, who served as health minister under John Howard, and Greg Hunt, the current federal Health Minister, who was in the same debating team as Ms Wooldridge during her years at Melbourne University.

Ms Wooldridge is encouraged by the conversations she hears her teenage son having with his peers and his generation’s attitude towards gender equality.

She believes Australia is at a “turning point for change”.

“When you have incidents like what happened to Brittany Higgins and you see a mobilisation of students in relation to women’s safety, it really is fantastic. It has raised awareness across the board and engaged serious conversations, at small levels in families, right through to small businesses, large companies and, of course, our parliaments.”