Road workers have been accused of damaging Salisbury Plain, a 6,000-year-old site near Stonehenge where the UK’s first hunter-gatherers lived at the end of the Ice Age.

The alleged damage was done when gauges were being installed to monitor the water table at Blick Mead, a number of tepid springs in the grounds of Amesbury Abbey, in Wiltshire, considered the ‘first place in Britain’. 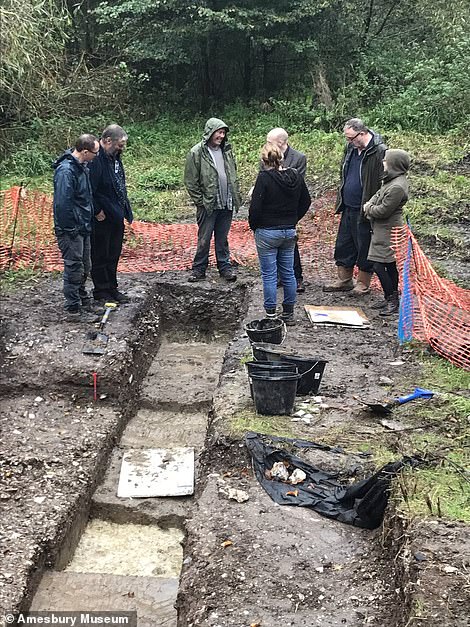 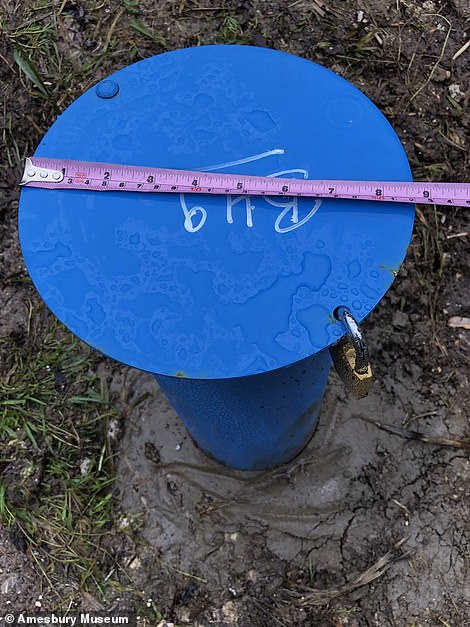 There are fears Highways England caused irreparable damage to the Mesolithic site while trying to build a road tunnel to run under Stonehenge. The alleged damage was done when gauges were being installed to monitor the water table at Blick Mead, a number of tepid springs in the grounds of Amesbury Abbey, in Wiltshire, considered the ‘first place in Britain’ 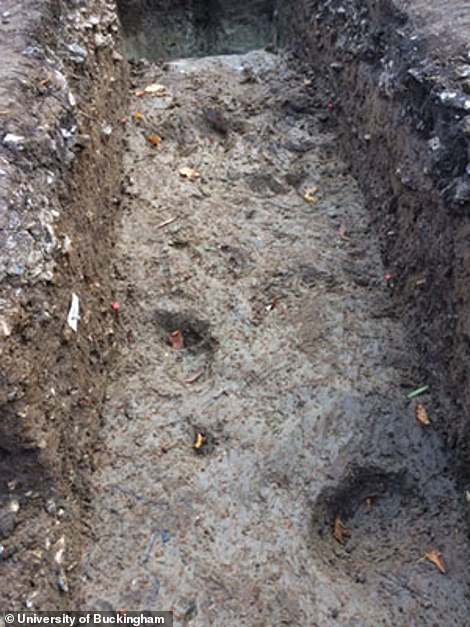 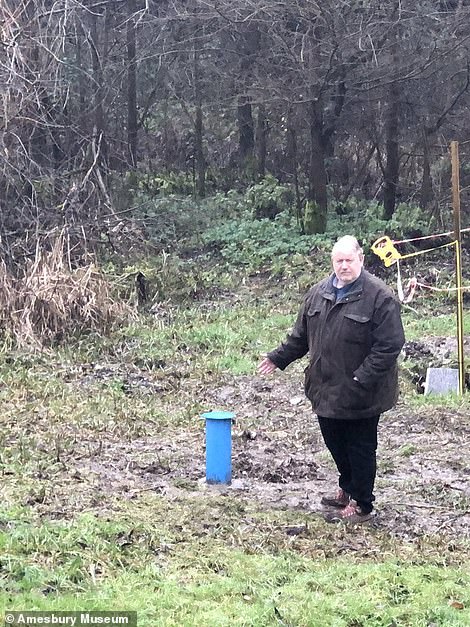 Remnants from the Mesolithic period – from 8000 BC to 2,700 AD – offer scientists vital insights into the way hunter-gatherers lived during the period. Among the finds in recent years is a carefully constructed stone platform on site of an extinct river which could have part of a pathway or jetty, as well as hoof prints of prehistoric cattle, known as aurochs

Remnants from the Mesolithic period – from 8000 BC to 2,700 AD – offer scientists vital insights into the way hunter-gatherers lived during the period.

However damage to unique site could lower the water table, threatening any archaeology preserved in the waterlogged ground, says David Jacques, professor of archaeology at the University of Buckingham.

Among the finds in recent years is a carefully constructed stone platform on site of an extinct river which could have part of a pathway or jetty, as well as hoof prints of prehistoric cattle, known as aurochs.

Prof Jacques, who discovered the site 12 years ago, told the Daily Telegraph: ‘This is a travesty. We took great care to excavate this stone platform as it was clearly put there to preserve the aurochs’ footprint. 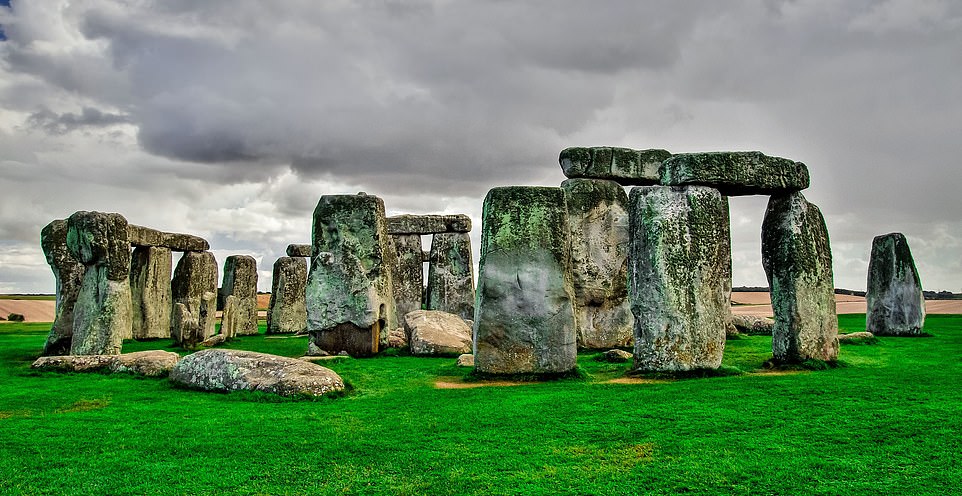 Stonehenge was built thousands of years before machinery was invented. The heavy rocks weigh upwards of several tonnes each. Some of the stones are believed to have originated from a quarry in Wales, some 140 miles (225km) away from the Wiltshire monument

‘It may be that this explains why Stonehenge was built. These monster cows provided food for 300 people so were revered.’

Adding: ‘There are thousands of years of history lying undisturbed in the water-logged ground. It’s a miracle it has survived and would be a disaster if it was lost.’

Highways England said: ‘We are not aware of any damage being caused to archaeological layers.

‘The works have been undertaken in a highly professional manner, with an archaeologist on site and with due care being exercised at all times.’

Stonehenge was built thousands of years before machinery was invented.

The heavy rocks weigh upwards of several tonnes each.

Some of the stones are believed to have originated from a quarry in Wales, some 140 miles (225km) away from the Wiltshire monument.

To do this would have required a high degree of ingenuity, and experts believe the ancient engineers used a pulley system over a shifting conveyor-belt of logs.

Historians now think that the ring of stones was built in several different stages, with the first completed around 5,000 years ago by Neolithic Britons who used primitive tools, possibly made from deer antlers.

After the Neolithic Britons – likely natives of the British Isles – started the construction, it was continued centuries later by their descendants.

Over time, the descendants developed a more communal way of life and better tools which helped in the erection of the stones.

Bones, tools and other artefacts found on the site seem to support this hypothesis.

HOW WAS STONEHENGE BUILT?

Stonehenge is one of the most prominent prehistoric monuments in Britain. The Stonehenge that can be seen today is the final stage that was completed about 3,500 years ago.

According to the monument’s website, Stonehenge was built in four stages:

First stage: The first version of Stonehenge was a large earthwork or Henge, comprising a ditch, bank and the Aubrey holes, all probably built around 3100 BC.

The Aubrey  holes are round pits in the chalk, about one metre (3.3 feet) wide and deep, with steep sides and flat bottoms.

Excavations revealed cremated human bones in some of the chalk filling, but the holes themselves were likely not made to be used as graves, but as part of a religious ceremony.

After this first stage, Stonehenge was abandoned and left untouched for more than 1,000 years.

Second stage: The second and most dramatic stage of Stonehenge started around 2150 years BC, when about 82 bluestones from the Preseli mountains in south-west Wales were transported to the site. It’s thought that the stones, some of which weigh four tonnes each, were dragged on rollers and sledges to the waters at Milford Haven, where they were loaded onto rafts.

They were carried on water along the south coast of Wales and up the rivers Avon and Frome, before being dragged overland again near Warminster and Wiltshire.

The final stage of the journey was mainly by water, down the river Wylye to Salisbury, then the Salisbury Avon to west Amesbury.

The journey spanned nearly 240 miles, and once at the site, the stones were set up in the centre to form an incomplete double circle.

During the same period, the original entrance was widened and a pair of Heel Stones were erected. The nearer part of the Avenue, connecting Stonehenge with the River Avon, was built aligned with the midsummer sunrise.

Third stage: The third stage of Stonehenge, which took place about 2000 years BC, saw the arrival of the sarsen stones (a type of sandstone), which were larger than the bluestones.

They were likely brought from the Marlborough Downs (40 kilometres, or 25 miles, north of Stonehenge).

The largest of the sarsen stones transported to Stonehenge weighs 50 tonnes, and transportation by water would not have been possible, so it’s suspected that they were transported using sledges and ropes.

Calculations have shown that it would have taken 500 men using leather ropes to pull one stone, with an extra 100 men needed to lay the rollers in front of the sledge.

These stones were arranged in an outer circle with a continuous run of lintels – horizontal supports.

Inside the circle, five trilithons – structures consisting of two upright stones and a third across the top as a lintel – were placed in a horseshoe arrangement, which can still be seen today.

Final stage: The fourth and final stage took place just after 1500 years BC, when the smaller bluestones were rearranged in the horseshoe and circle that can be seen today.

The original number of stones in the bluestone circle was probably around 60, but these have since been removed or broken up. Some remain as stumps below ground level.