The president of the Seychelles has accused world leaders of being “blind” to the threat of climate change.

Danny Faure told Sky News that his country was “paradise on Earth” and appealed to governments to do their bit to help save it.

President Faure spoke out as he was shown around the Ocean Zephyr, the mothership for the Nekton mission that will use submersibles to survey the deep-water reefs of the tropical archipelago.

He said: “Governments need to take responsibility. We cannot destroy our oceans.

“The Seychelles is such a beautiful country. It is paradise on Earth and our inhabitants are guardians of this paradise. We keep it for humanity.

“The scientific community, children around the world in schools – they see what is happening.

“So why can’t other governments. Are they blind?” 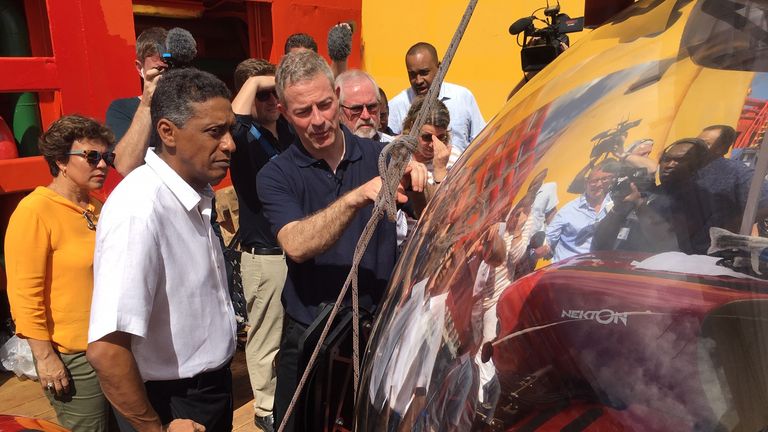 Coral reefs in the shallow waters of the Seychelles have been badly hit by rising sea temperatures. Some have been reduced to rubble.

Plastic pollution from thousands of miles away is being washed up on remote atolls, harming and killing marine life.

And the vast schools of tuna, which account for the islands’ second largest source of income after tourism, are beginning to move away in search of cooler water.

The Seychelles government is attempting to mitigate the impact by rapidly moving towards a “blue economy” to ensure fishing and other extraction is sustainable.

It recently swapped some of its debt in exchange for setting up a marine protected area that will soon be extended to cover 30% of its vast ocean territory.

But President Faure said climate change is a global problem.

“As (world) leaders we define our agenda,” he said.

“It’s time we pooled our resources for future generations.”

:: Sky News will broadcast live from 300 metres down in the Indian Ocean on 18,19 and 20 March. The series – called Deep Ocean Live – will examine the impact of plastic pollution and climate change, and includes the deepest ever live news programme from submersibles.

:: Sky’s Ocean Rescue campaign encourages people to reduce their single-use plastics. You can find out more about the campaign and how to get involved at www.skyoceanrescue.com