The horrors of the Great War in colour: Images that show the extraordinary spirit of World War One servicemen are transformed to show ‘real faces of real people’

Black and white photos have been transformed with colour to shed new light on the lives of soldiers during the First World War.

Stunning colourised images capture both the horrors of the Great War and the extraordinary spirit of servicemen as they tried to keep up morale.

A Canadian charity breathed new life into the photos, in the hope that a new generation will be able to connect more easily with the experiences of soldiers during the global conflict, which spanned from 1914 to 1918.

They show Canadian soldiers on their way to a training exercise in Salisbury Plain, guarding German prisoners and wading through thick mud on the battlefields of Belgium.

In more lighthearted scenes, troops are shown presenting a dog to a nurse at a clearing station towards the end of the Battle of the Somme and preparing for a variety show in France. 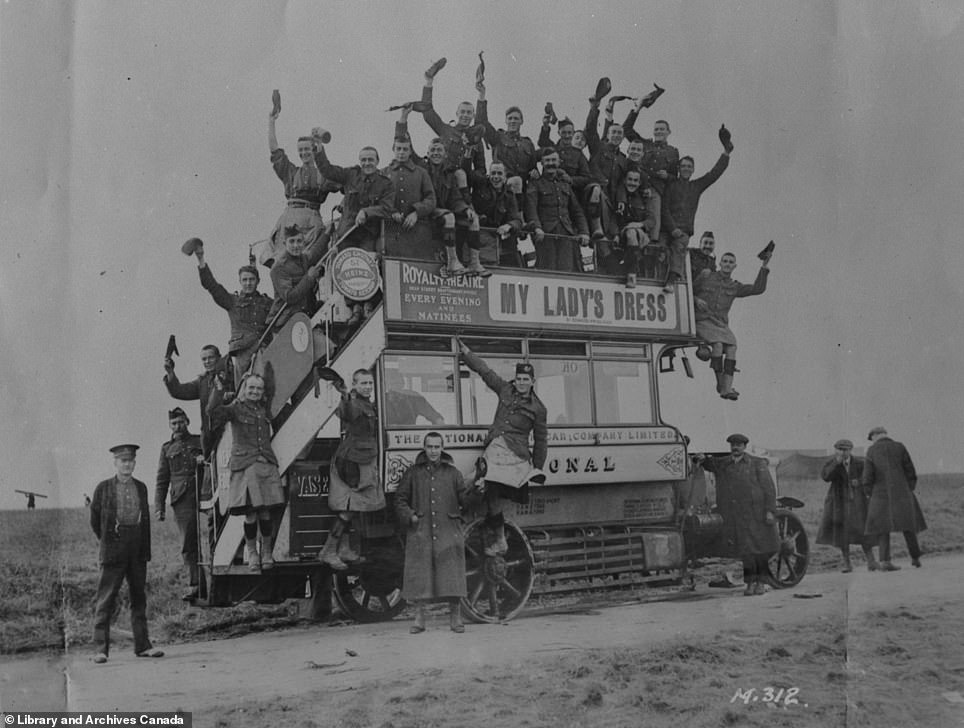 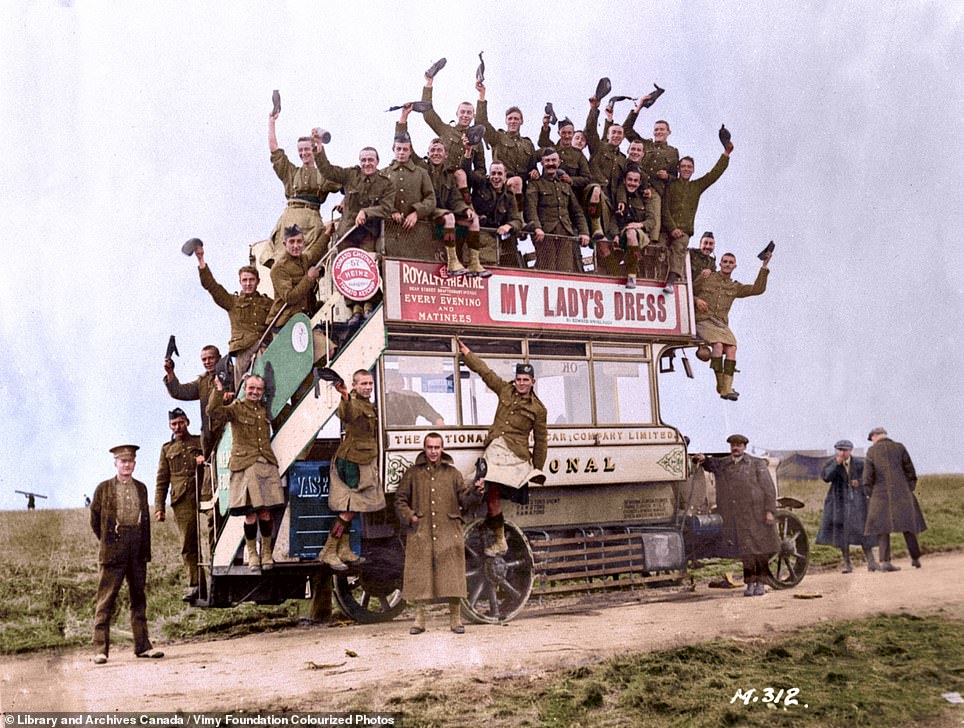 Transformed: Black and white images have been colourised to shed new light on the lives of Allied troops during the First World War. Soldiers from the 3rd Brigade are pictured waving from a bus during a journey from Plymouth to Salisbury Plain ahead of training exercises. It is not clear when exactly the picture was taken 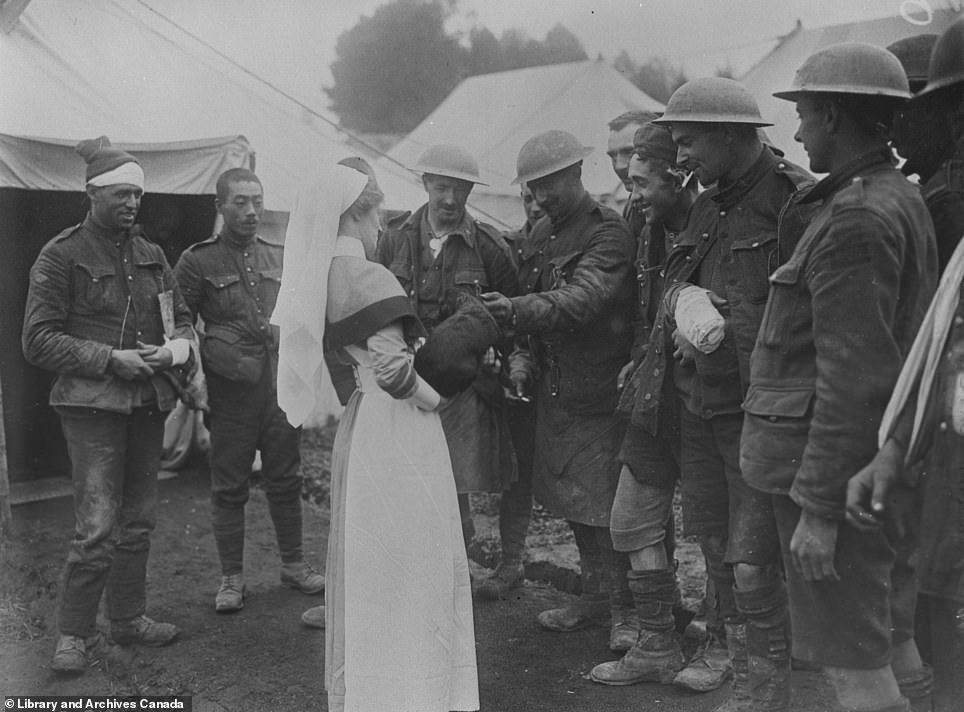 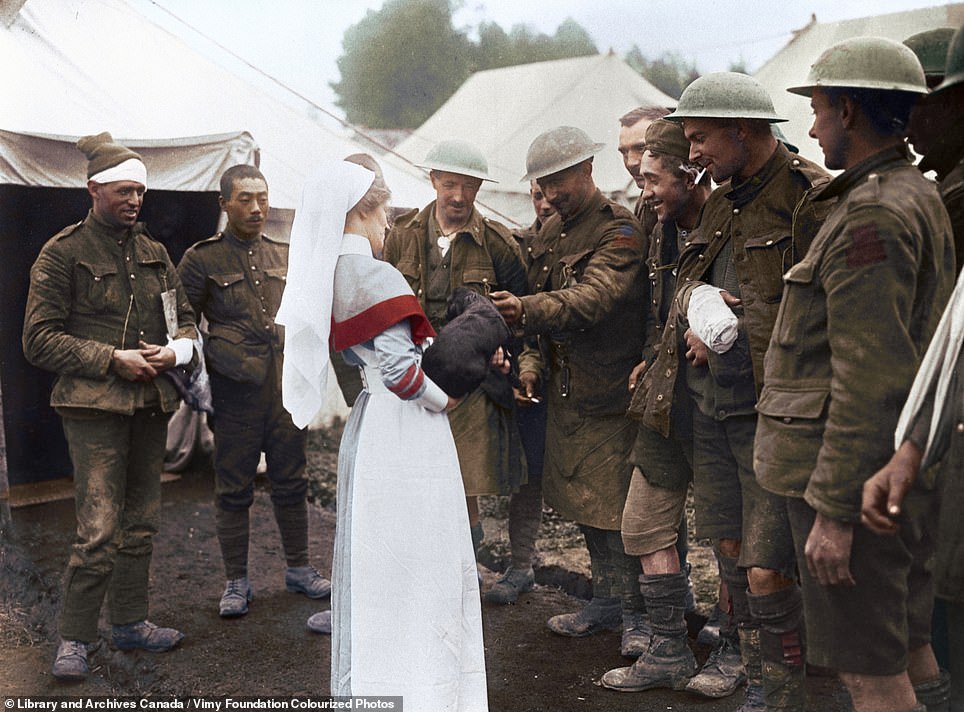 Soft touch: Wounded Canadian soldiers are pictured handing a dog to a nurse in a clearing station in France towards the end of the Battle of the Somme in October 1916.  More than three million men fought in the battle and one million men were wounded or killed 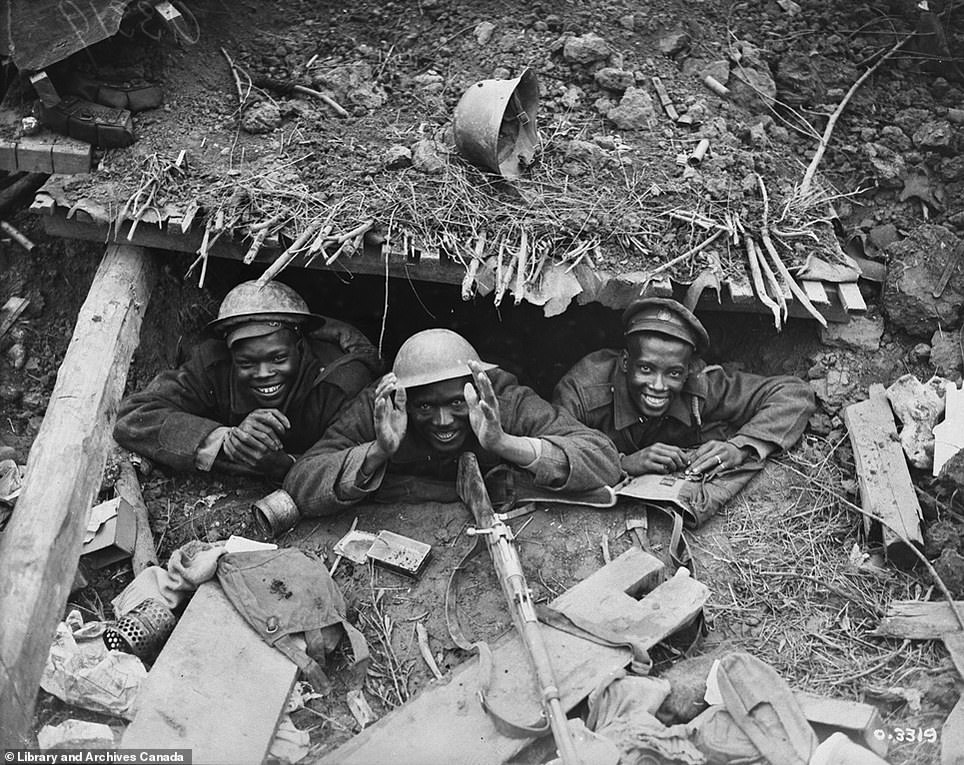 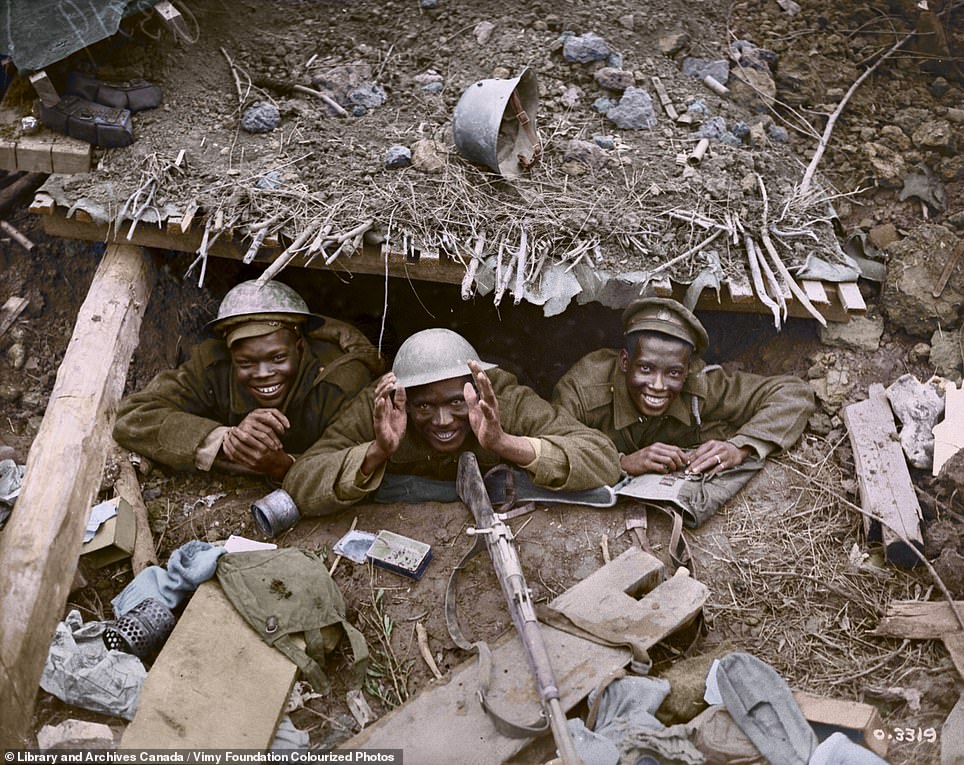 Stunning colourised images capture both the horrors of the Great War and the extraordinary spirit of servicemen as they tried to keep up morale. Three Canadian soldiers are pictured in a German dug out which was captured east of the French city of Arras on the Western Front 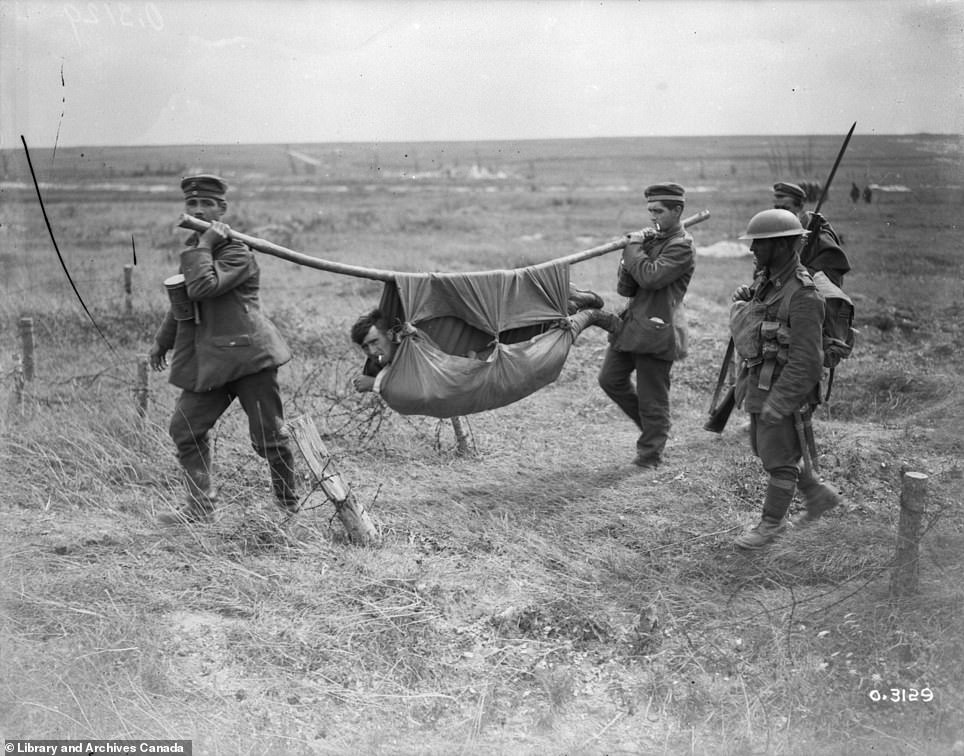 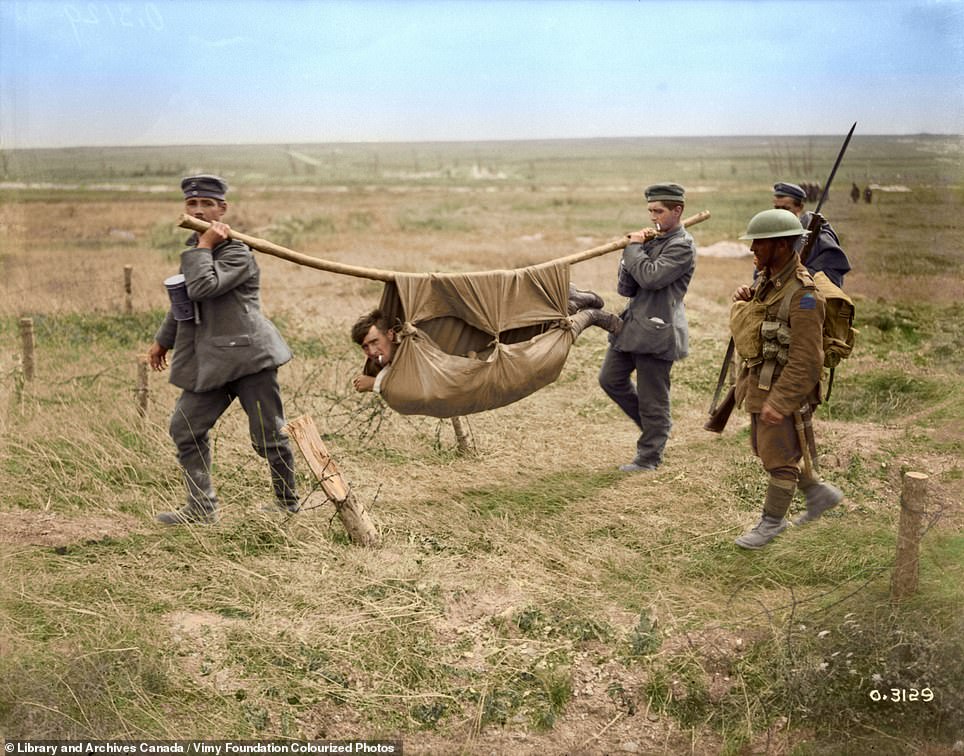 A Canadian charity breathed new life into the photos, in the hope that a new generation will be able to connect more easily with the experience’s of soldiers during the global conflict, which spanned from 1914 to 1918. Two German prisoners are pictured carrying a wounded Canadian soldier during an Allied advance east of the French city of Arras in August 1918 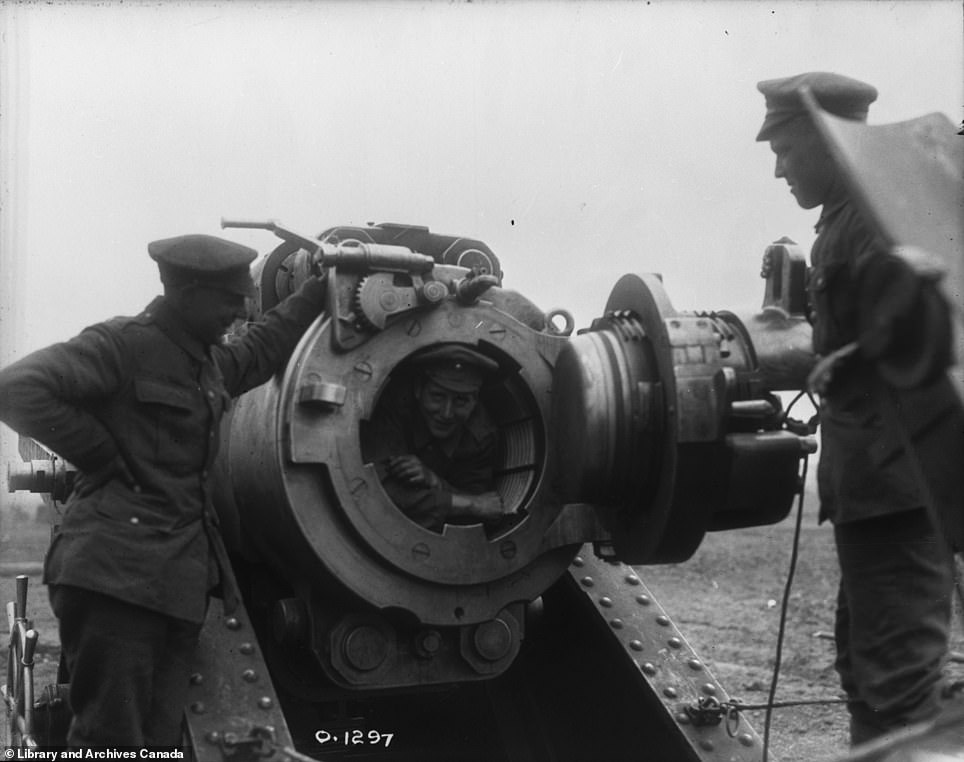 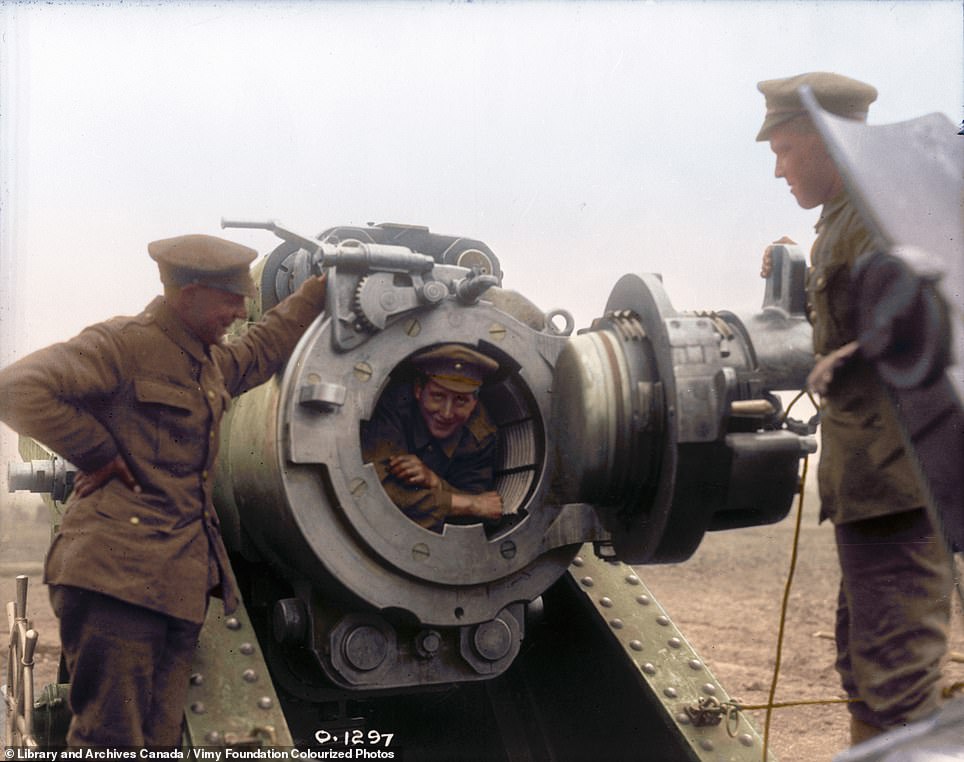 Having a blast: An Allied soldier jokes with fellow servicemen as he clambers inside a large Howitzer in May 1917. Their exacty location when the picture was taken is not known

The Vimy Foundation examined scores of black and white Canadian photos from the global conflict before settling on a final 150 to painstakingly colourise.

Transformed photos have gone on display at Canada’s national war museum and have been published in a book called They Fought In Colour.

Vimy Foundation executive director Jeremy Diamond told the BBC: ‘A lot of those details – people’s eyes and their expression and the backgrounds and the landscapes – are lost in black and white compared to colour.

‘It gives a great perspective of real events. They’re suddenly the real faces of real people.’ 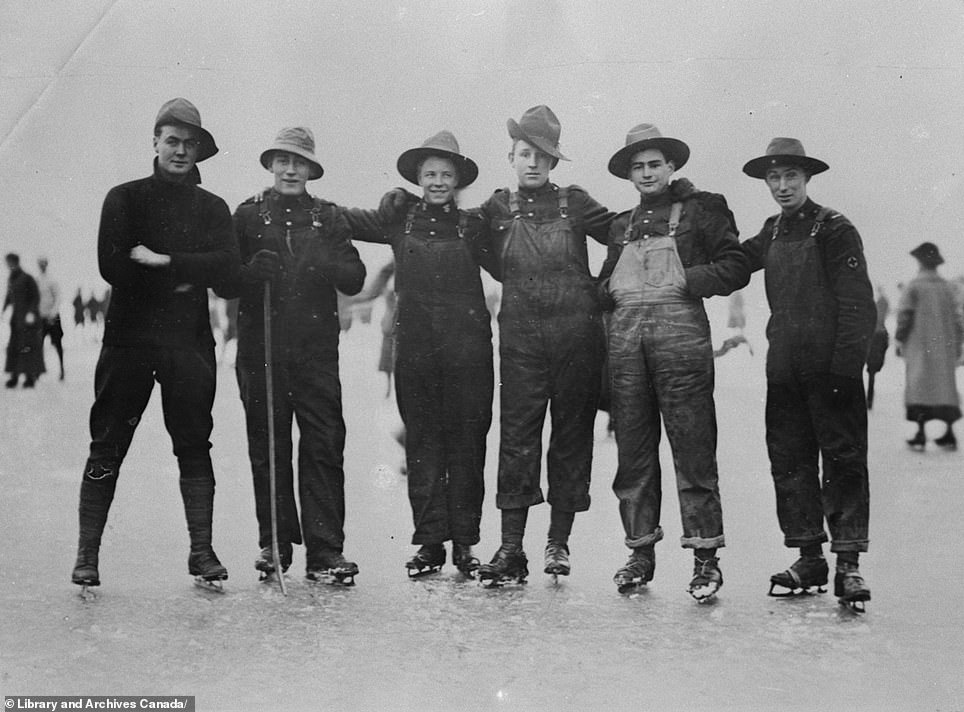 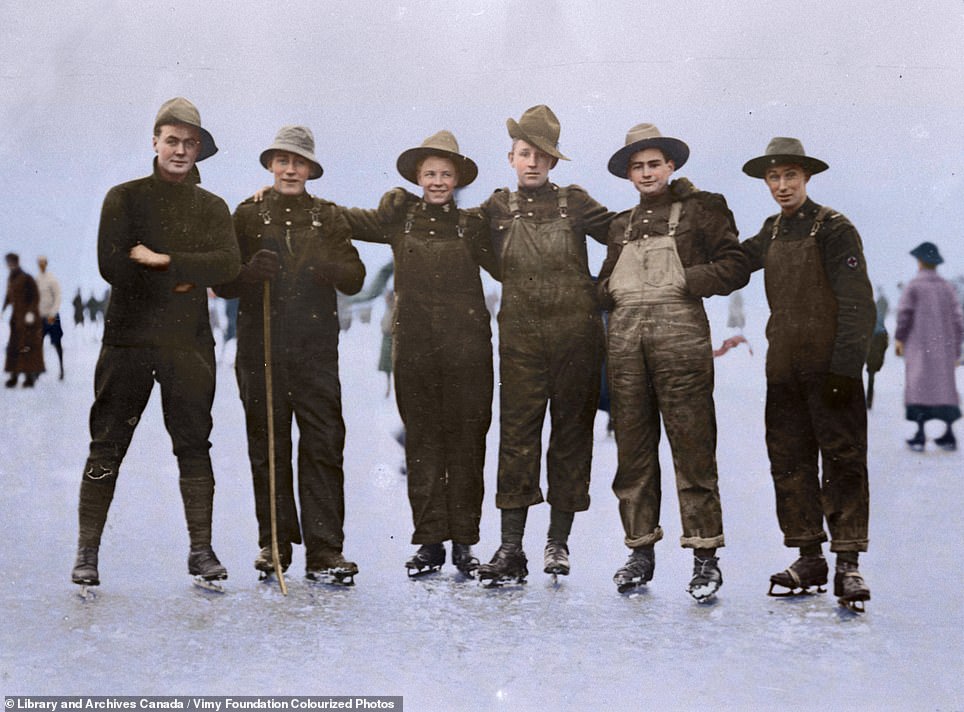 Another photo brought to life with colour shows Canadian forestry men ice-skating. It is not clear where exactly the picture was taken. The Canadian Forestry Corps was created during the First World War when it was discovered that huge quantities of wood were needed for use on the Western Front 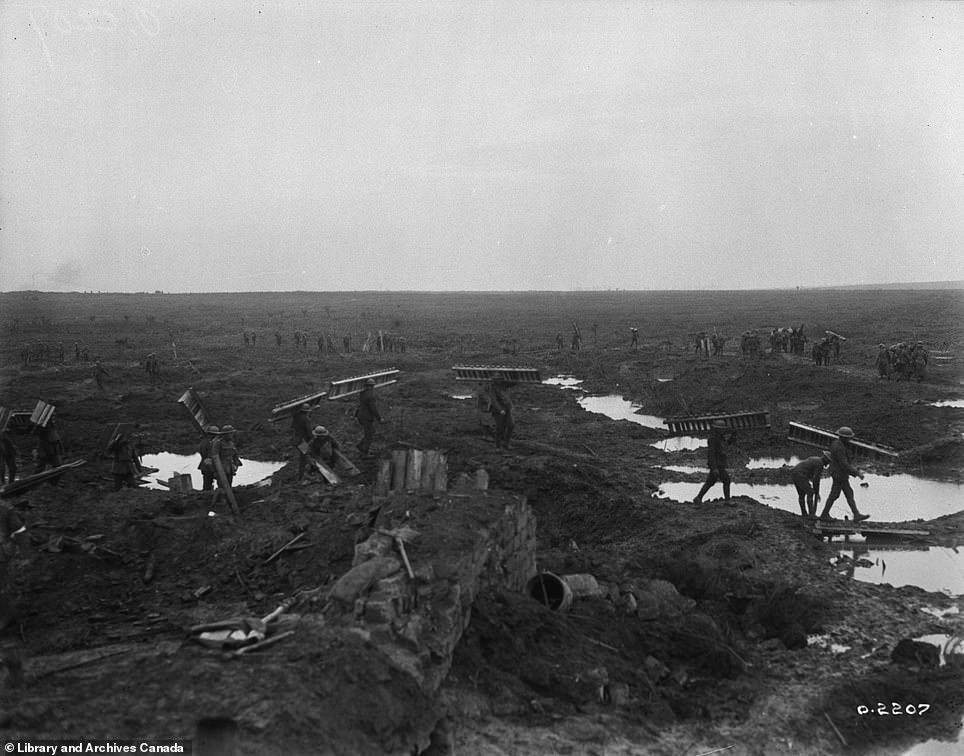 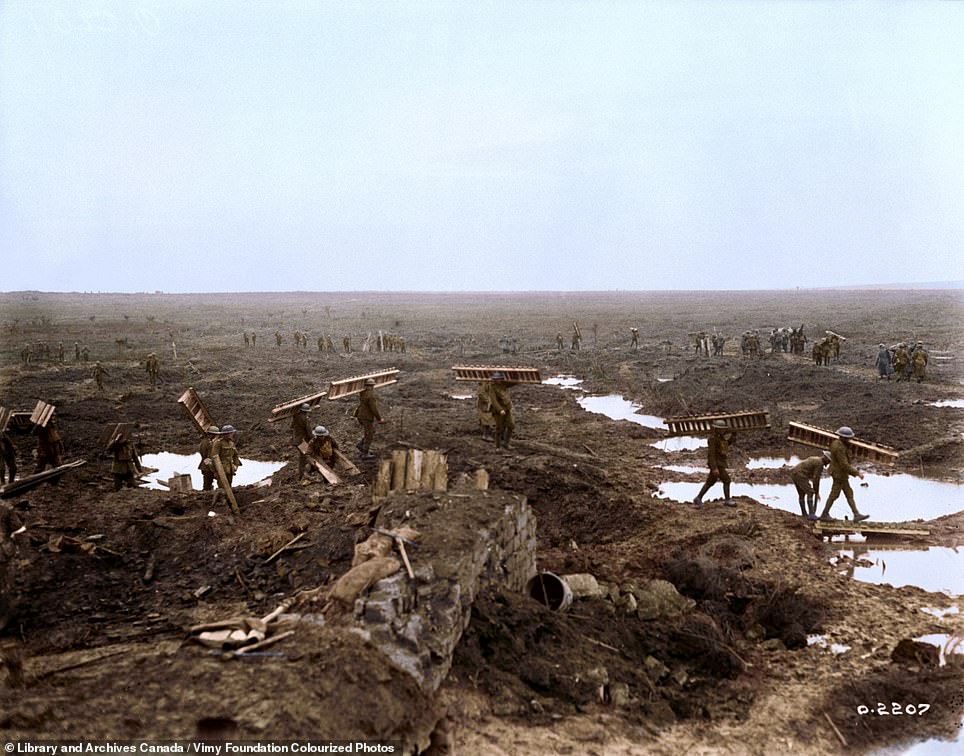 Canadian troops are pictured carrying trench mats as wounded servicemen and prisoners walk past in the background during the Battle of Passchendaele in 1917. The wooden platforms were needed to provide secure footing in Belgium’s muddy battlefields 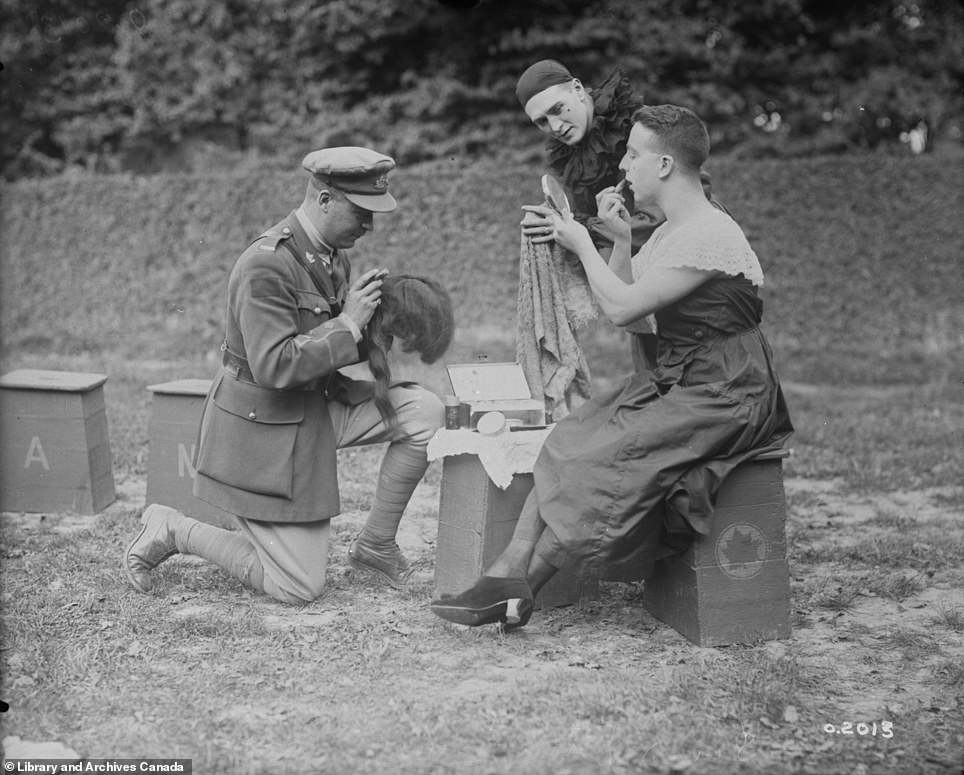 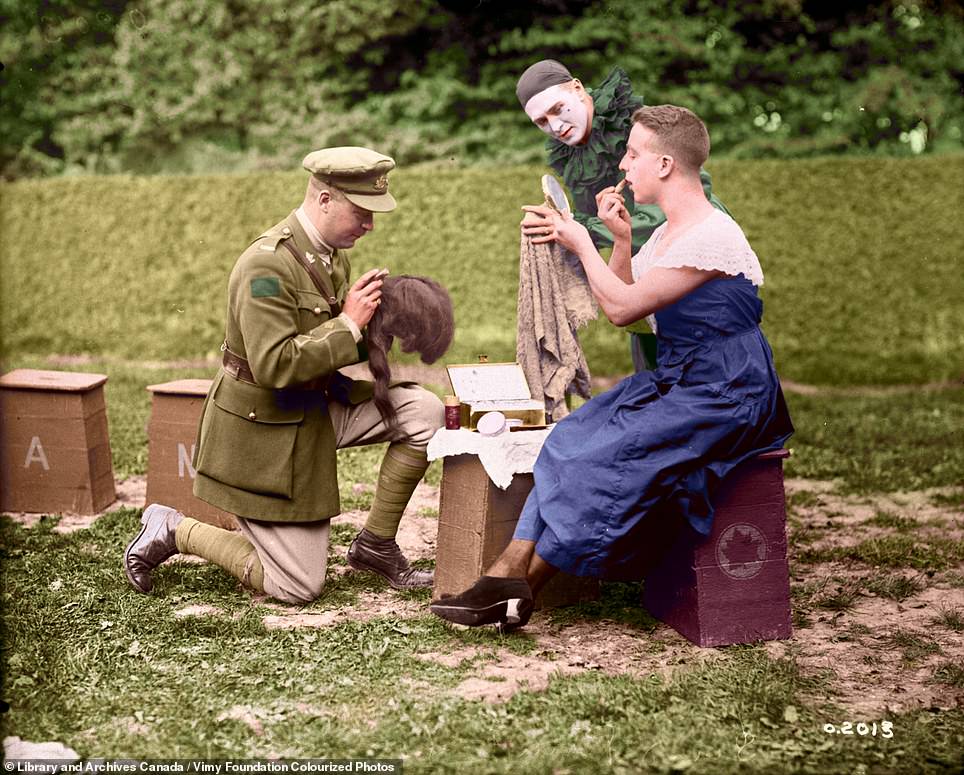 A soldier in fancy dress applies lipstick while a second, wearing white face paint, watches on and a third prepares a wig ahead of a Maple Leaf Concert Party in France in 1917 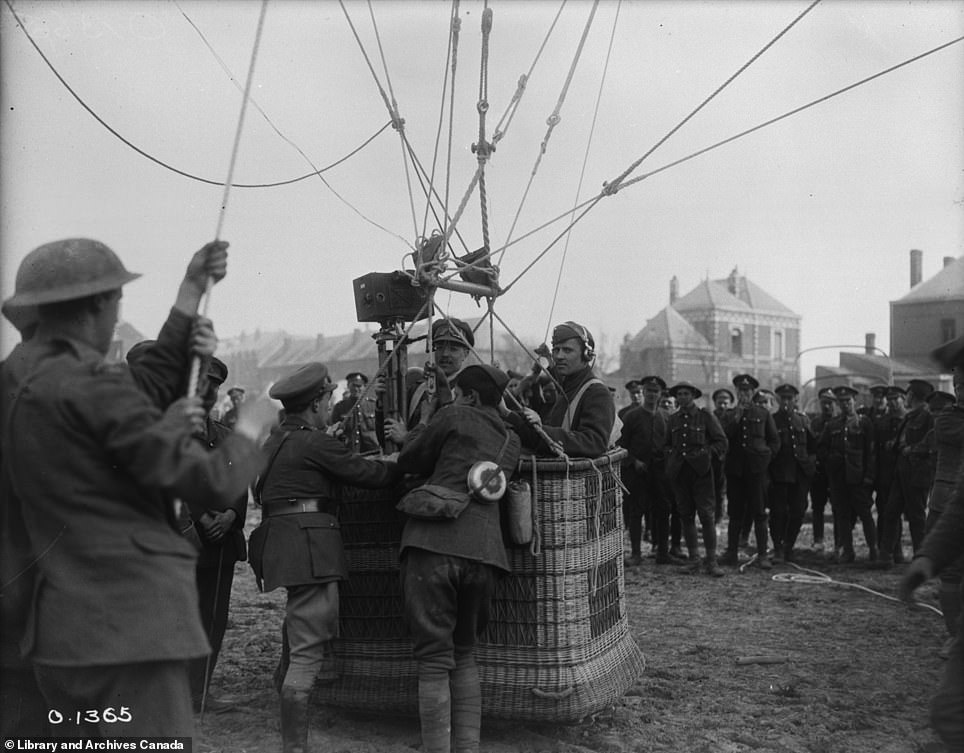 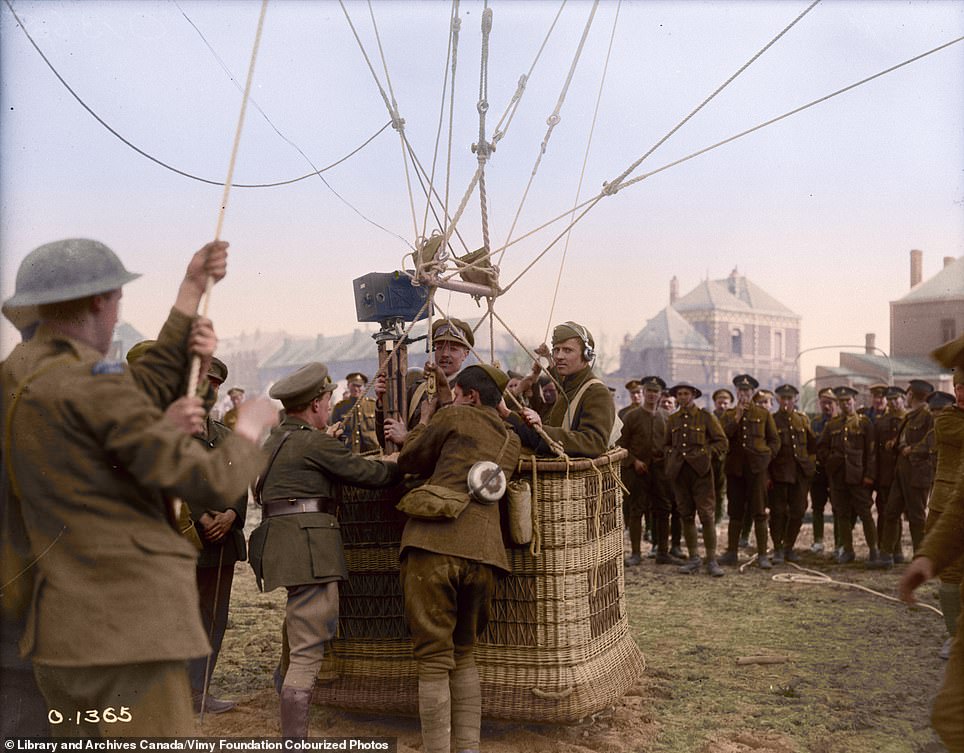 Caught on camera: An official Canadian photographer braces himself for an ascent in the basket of a Kite Balloon in May, 1917 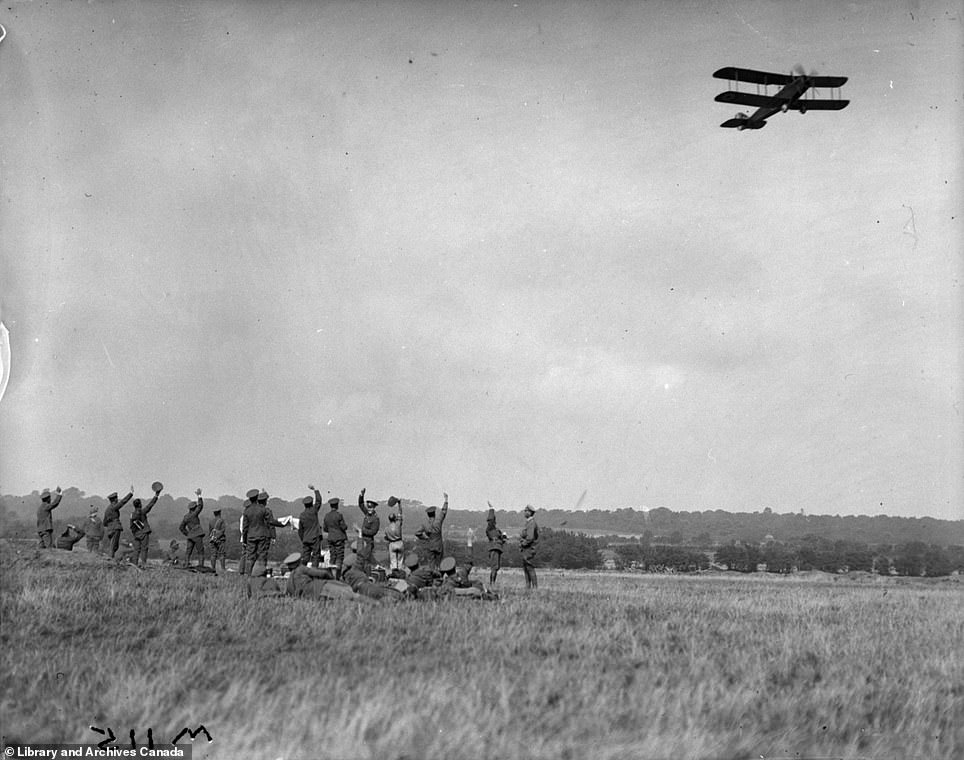 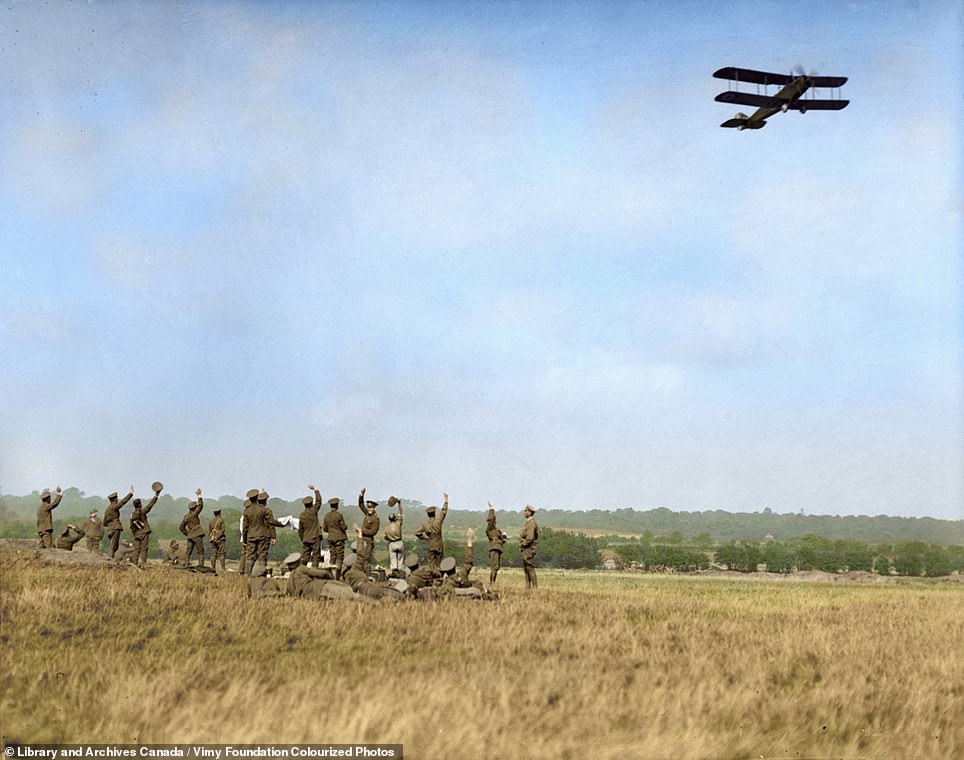 Flypast: Servicemen wave as a warplane passes overhead during a lunch break at the Shorncliffe army camp in Kent in September 1917

More than 650,000 Canadians served in WW1 out of a country which had a population of just 8million at the time.

It comes after Lord of the Rings director Peter Jackson released incredible colourised footage of the First World War with grainy video of soldiers carefully remastered for the first time to mark the centenary of the conflict.