The details in this story may be distressing to some readers.

An alleged victim of historical sexual abuse at Xavier College is calling on the private school to remove the celebrated name of one of his alleged abusers from its performing arts centre.

The former student, who asked to be identified by his first name Brian, is taking legal action over several instances of groping by former staff when he attended the Kew school between 1955 and 1960. 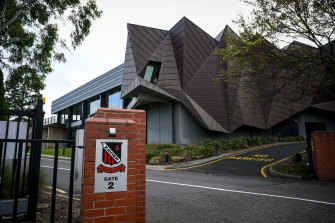 Brian, now 79, names Eldon Hogan and Father Patrick Stephenson as the two alleged perpetrators in his statement of claim filed in the Supreme Court of Victoria in March.

In 2016, Xavier removed Stephenson’s name from its sport centre after four former students made allegations of inappropriate touching. At the time, the school said the allegations could not be substantiated or ruled out.

Hogan, a voluntary commanding officer of the cadet unit and rugby coach at Xavier, died in 1995 and bequeathed $4 million to the school through a trust that paid for the construction of a performing arts centre. 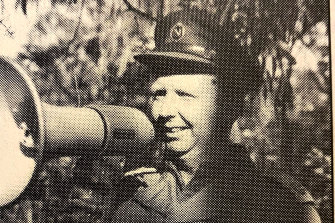 Eldon Hogan in 1961.Credit:The Sincere gift of himself : a biography of Eldon Hogan

Built in 2008, the state-of-the-art building was named the Eldon Hogan Performing Arts Centre and hosts the school’s music recitals and performing arts shows.

“Absolutely, the name should definitely be taken off [the centre],” said Brian in an interview with The Sunday Age.

“Maybe that was a condition of bequest that his name stay on it.”

As part of his legal claim, Brian says he was abused several times on cadet camps, when Hogan would place his hands around his shoulders and then fondle his genitals.

“Each year we would go on a cadet camp to site 17 in Seymour. It would be around a week or two. It was winter, so the nights were very cold. A few of us would build this fire and sit around it,” recalled Brian. 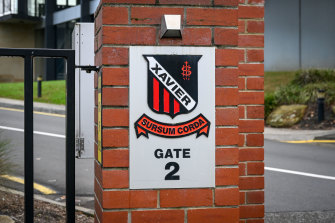 “He’d come along and sit next to you, put his arm around you and put his other hand again on your genitals. He did it to me and some other kids who mentioned it. That would go on for maybe half an hour or so.”

Asked about the allegations and whether it would keep Hogan’s name on the building, Xavier’s principal William Doherty and the school’s board declined to comment.

Brian is taking legal action against the Australian Jesuits, the Catholic organisation which established Xavier.

After years of revelations of abuse at Xavier, the school said last year that it wanted to find a new way to support survivors rather than engage in costly legal battles.

The alleged abuse at Xavier has had a profound effect on Brian’s life, including decades of alcohol abuse.

“It’s something that I’ve carried with me since my school days. I’ve made a hell of a mess of my life, and I believe that it’s at least partly caused by the abuse at Xavier,” he said. 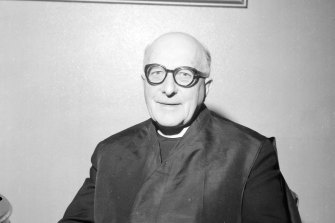 “I was actually drinking alcoholically at school before I left.

“One day (years later), I don’t know what happened, but I just decided I’d had enough, it was probably the only sane decision I’d made for years. That was in 1978. And I haven’t had a drink since then.”

He said he had turned things around and later attended university, including completing a masters in applied linguistics: “I’m now probably as happy as I can ever be,” he said.

According to his biography, published in 1999 by the Eldon Hogan Trust, Hogan attended Xavier as a boy and inherited significant wealth from his relatives, which allowed him to volunteer at the school as an adult rather than work. 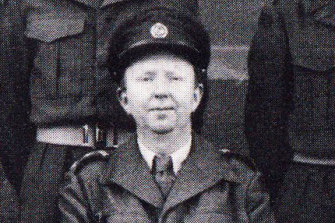 “Why Eldon continued to seek a role at Xavier once he was no longer a student there is indeed the most fascinating mystery of his life,” his biographer wrote.

There are several theories around Hogan’s sudden exit from the school in 1963; however, his biographer wrote that he was asked by the school to leave.

He was later “eased back into the fold”, his biography states, before his death at the school’s annual Maytime Fair fundraiser for the Jesuits.

Hogan’s car had become stuck on the school grounds and when he crawled underneath to check, the automatic transmission slipped and the car rolled on top of him.

His bequest has also paid for prizes, scholarships, and the publication of several books about the school’s history. 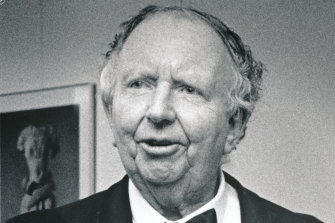 Eldon Hogan when he became an honourary life member of the Old Xaverians Association.

It is not the first time a former Xavier student has made a complaint about Hogan. In 2008, former student David Kelly sent a letter to then-principal Chris McCabe informing him that Hogan was known for touching boys.

“Like many boys I had to fend off the touches, the genital grabs and the attention in the change-rooms,” he wrote in the letter.

Kelly told The Sunday Age he received an acknowledgment of the letter, however, nothing had been done about it. He remembered Hogan driving kids in his car to rugby training:

“We would always fight not to sit next to him, his hand would slip from the gearstick,” he recalled this week.

Xavier did not comment on the letter or the Supreme Court proceedings for legal reasons.

Maurice Blackburn lawyer Emily Forbes said it was important for people to come forward if they had witnessed any abuse at Xavier.

“The important thing here is it’s not easy to speak out against a powerful institution like Brian has, and I commend him for that,” she said.

The Society of Jesus in Australia Limited, the Catholic organisation named in the legal action, said in a statement:

“The Australian Jesuit Province is committed to the fundamental right of young people to be respected and safeguarded against any form of abuse.

“We take reports of the abuse of young people in our care very seriously, including those that are reported to have occurred in the past.”