Standing in front of traffic on London Bridge, the demonstrators set off blue smoke flares and warned such action “will only build”. 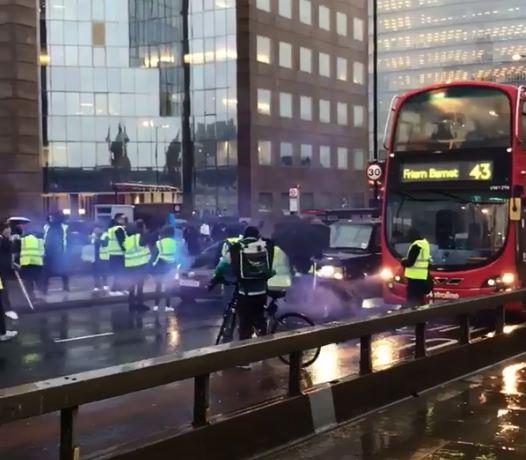 This afternoon’s protest was again live-streamed on a Facebook page titled “Fighting for Justice”, which said that activists had also protested outside the Houses of Parliament.

Video footage showed the demonstrators gather at a bus stop on London Bridge, before putting on yellow vests and spreading across the busy Thames River crossing.

Blocking buses travelling in both directions, a man could be seen walking near people with a blue flare going as traffic quickly built up at about 3pm.

As horns were tooted in support, they called out "Brexit now, Brexit now. What do we want? Brexit. When do we want it? Now."

A woman filming for the live-stream can be heard telling viewers: "We are demonstrating about the atrocities going on across the country."

She added that people were angry about “corruption” and injustices, before warning, "this will only build".

The yellow vest-clad demonstrators received many messages of support during the filming, including from one person saying they were "proud to be British" and "we want our country back". 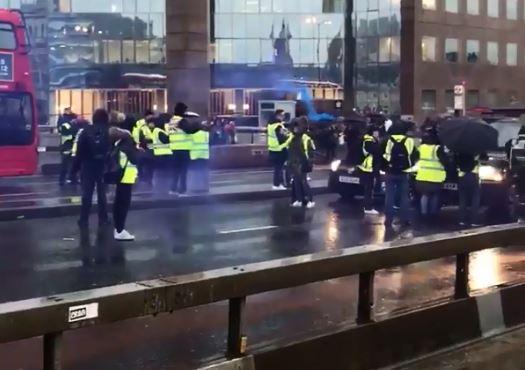 People labelled them "patriots", while one viewer urged them to "keep going".

London-based journalist Greg Barradale was among those to witness the protest.

He told the Sun Online: "I was walking across London Bridge at 3pm and saw a group of people there, stopping buses.

"There would have been about 20 people wearing yellow vests, and they had blue smoke flares.

"They were standing in front of the buses in both directions. Then I saw a police van turn up."

A spokesman for the Met Police said that officers “attended a small number of protesters attempting to disrupt traffic on London Bridge.

"There were no arrests. An appropriate policing plan remains in place."

With the action occurring in the wake of fierce protests in France, Tim Scott, co-founder of Liberty Defenders, posted on the Fighting for Justice Facebook page: "We agree the Elite are out of control and are trying to silence the working class.

"Enough is enough time to plan for street movements across the UK with no permission [sic] from the police no political agenda just British people united in a common goal for fairness in every day life."