Khaled al-Yamani demanded the Houthis lay down their arms, something they have previously refused to do. 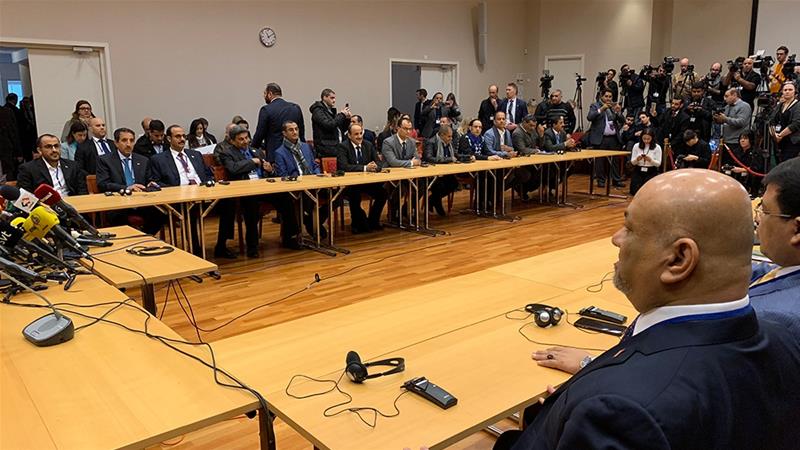 Rimbo, Sweden – Yemen’s foreign minister has sparked anger in his home country after he demanded Houthi rebels, who control the capital and large swathes of territory, hand over power to his exiled government.

Speaking at UN-sponsored peace talks in the Swedish town of Rimbo, Khaled al-Yamani gave little indication he was going to offer concessions to his adversaries after the first day of peace talks were held in nearly two years.

“They [the Houthis] should withdraw from the institutions of the state and hand them back to the legitimate government,” a defiant al-Yamani told Al Jazeera.

“They should respect the will of the international community and surrender their arms, ammunitions and missiles.”

Officials from President Abd-Rabbu Mansour Hadi’s government and representatives from the Houthi movement are holding separate closed-door discussions with the UN until December 14 aimed at discussing ways to end the fighting that has killed an estimated 56,000 people.

“Other than that, there will be no settlement, no solution.”

The Houthis have previously refused to abide by UN Resolution 2216, which stipulates they withdraw from areas they seized in 2014 and hand over heavy weapons to the government.

The rebels have claimed they have a popular mandate to govern Yemen and say Hadi, who was appointed in 2012 to rule the country for an interim period of two years, has lost his legitimacy.

When asked by Al Jazeera about a Houthi proposal to replace the presidency with a presidential council, Yamani lashed out, calling the idea “nonsense”.

Residents in the capital criticised al-Yamani’s remarks saying it appeared the government was trying to sabotage negotiations before they could even begin.

Mohammad al-Ghabsi, a journalist at the al-Thawra newspaper said: “Al-Yamani represents the ‘legitimacy’ [the Yemeni government], that the Saudi capital has taken in, by mobilising armies and the world’s weapons to try and return it to the Yemeni people. But they [Yemenis] have spat it out and thrown it outside their borders, politically and geographically.

“He, and others like him, who have similarly thrown themselves in the arms of Riyadh and Abu Dhabi – have a prescribed role, he can’t overstep the boundaries drawn for him nor can he read from a different script than the one handed to him.”

Another resident said it was surprising that al-Yamani would make such remarks and not focus on his government’s inability to return to Aden, where the foreign minister hails from.

“He’s unable to return to his hometown and knows this well, so how does he think can return to Yemen and take our cities,” he said requesting anonymity.

Hadi and much of his government have been based in Riyadh since 2015 when the Houthis, in cooperation with troops loyal to Hadi’s predecessor, former president Ali Abdullah Saleh, captured Sanaa and large expanses of the country.

Saudi Arabia, along with several other Sunni Arab countries, then intervened in the conflict, launching a massive aerial bombardment campaign aimed at restoring Hadi’s government.

Perceiving the Houthis’ advance as an Iranian-orchestrated plot to destabilise the region, analysts expected the fighting to last only a few months.

But after more than three years of fighting, the violence shows no signs of abating, and has cost the coalition billions of dollars and left a staggering 22 million people needing humanitarian assistance.

The UN’s special envoy for Yemen, Martin Griffiths, is seeking to introduce a set of confidence-building measures at the talks that will eventually pave the way for future negotiations to end the war.

While the opposing sides are not meeting face-to-face, Griffiths wants the parties to negotiate a ceasefire in Hodeidah city, make further agreements on planned prisoner swaps and reopen Sanaa international airport.

Griffiths said while the talks were “consultations” and “not yet beginning the process of negotiations”, they could “bring good news for Hodeidah and for the people of Yemen”.

“What we’re trying to do is provide a just resolution to this conflict based on resolutions, including UN resolution 2216, which is not out of date,” Griffiths said.

“It is a part of my mandate. Resolution 2216 calls for an inclusive political solution and that’s what we’re hoping to achieve.”

The Houthis have told Al Jazeera they are committed to the talks and are willing to hand over the strategic port of Hodeidah to the UN.

Hodeidah is a lifeline for humanitarian supplies for the country’s war-wracked population.

The other main route in and out of Houthi-held areas is the Sanaa airport, but access has been restricted by the Saudi-led coalition which controls Yemen’s air space.

Mohammed Ali al-Houthi, the head of the rebels’ Supreme Revolutionary Committee, said in a Twitter post that if no deal was reached to re-open the airport, which has been shut since 2016 and suffered repeated air strikes, his movement could close it on the ground to all traffic including UN flights.

The rebels had previously promised to end all drone and missile attacks on Saudi Arabia and the UAE, in return for the alliance ending its air attacks.

International pressure to end the war has mounted since the killing of Jamal Khashoggi, a critic of the Saudi crown prince, in October by Saudi nationals in the country’s consulate in Istanbul, Turkey.

Western powers have expressed their anger over the killing, with countries such as Germany and Norway suspending arms exports to Saudi Arabia and senators in the US questioning Washington’s strategic partnership with Riyadh.